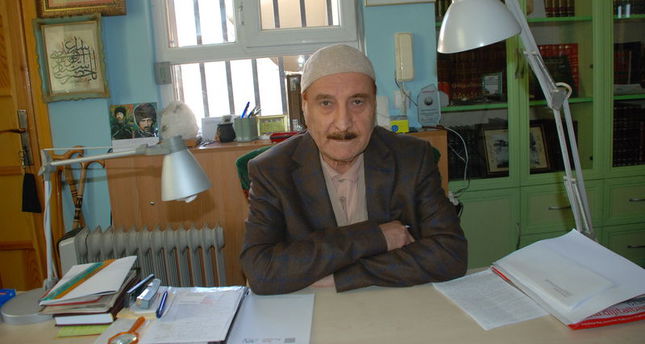 by Daily Sabah Dec 26, 2014 12:00 am
Abdulkadir Badıllı, a student of the prominent Islamic scholar Said Nursi, who came to the fore after voicing opposition to the Gülen movement, which claims to follow the principles of Nursi, passed away at the age of 78 early on Friday.

Badıllı who was a student of the late Islamic scholar Bediüzzaman Said Nursi, the author of the "Risale-i Nur" (Epistles of Light), a series of books on the exegesis of the Quran, died early on Friday at Ankara's Gazi Training and Research Hospital where he was receiving treatment due to difficulty in breathing.

Badıllı who suffered from complications in lungs and intestines was in intense care unit of the hospital for a while reportedly fell unconscious last week.

The head of the Barla platform, Said Yüce, announced the death of the deceased on Friday. Yüce also noted that Badıllı was brought to Ankara for a treatment from Şanlıuurfa province by a plane.

The body of Badıllı will reportedly be sent to Şanlıurfa for burial. Yüce stated that the other students of Said Nursi who are still alive will attend the funeral which is set to take place on Saturday after mid-afternoon prayer.

Badıllı became a known figure after he expressed discontent over Gülenist activities, which he believed were diversion from the ideologies of Said Nursi. As a result of his expression of dissent, Badıllı was targeted by the leader of Gülen movement, Fethullah Gülen, who filed a criminal complaint against him. Eight years in prison was being sought for him before his death.

In fact he was not the only student of Said Nursi who disapproved of Gülen movement's activities. The members of the Nur movement openly distanced themselves from the group following the December 17 and December 25 operations in 2013, that were allegedly launched by Gülenists in an attempt to topple the government, highlighting the rift between the two groups which had previously been under the same umbrella.

Badıllı is also known for being the author of three series of books named 'Mufassal Tarihçe-I Hayat' (elaborate history of life).