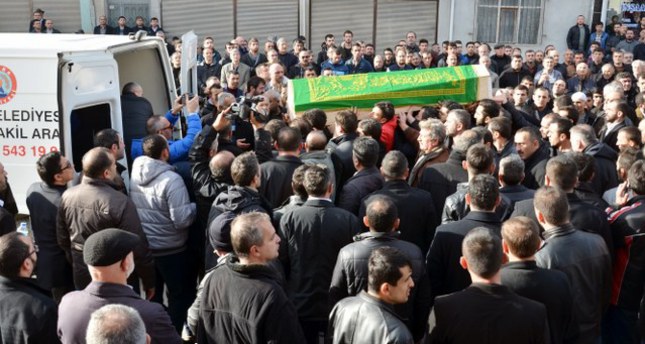 by Daily Sabah Dec 27, 2014 12:00 am
Wednesday's killings of two prominent mobsters in Istanbul's posh districts of Sarıyer and Nişantaşı triggered concerns that Turkey's once-feared mafia circles have made a comeback.

The first shooting targeted Ali Ekber Akgün, a Dutch-Turkish businessman known for his ties with the Dutch underworld. Akgün was a relatively obscure figure in the Turkish gangland, though he made a name for himself in the Netherlands for his involvement in a string of killings targeting mobsters and accusations of drug trafficking.

When his Bentley stopped at a red light in the İstinye neighborhood in Istanbul's Sarıyer district, two gunmen emerged from a car behind his and opened fire. Akgün was killed while the gunmen fled. Turkish police launched an investigation and identified two gunmen who were recorded by security cameras near the scene. The Istanbul branch of the Turkish National Police mobilized to capture the suspects. Police officers from the counter-narcotics unit, the organized crime unit, intelligence and counterterrorism units joined the investigation. Turkish media reported that Akgün apparently feared for his life and was driving alone as a result, where his Dutch wife Maartje Geertruid was traveling in another car trailing his when the shooting occurred. Yet, police sources said Akgün did not request protection against any threats.

Media outlets reported that Akgün did not have any business activities in Turkey and ran a chain of cafes in the Netherlands.

Akgün, 40, first made the headlines in the Netherlands after the murder of Nedim İmaç, the Turkish president of Turkiyemspor football club who was accused of drug trafficking. Akgün, a former player for the club, was accused of orchestrating the murder in 2007. A notorious gangster summoned as a witness by a Dutch court claimed Akgün was also behind the murders of other criminal figures in the Dutch underworld, including Kees Houtman and Thomas van der Bijl. He was tried and released pending trial over a lack of evidence, and the Turkish businessman always denied the charges. Following his release in 2012, Akgün moved to Turkey and settled in Istanbul. Dutch media reported that Akgün was planning to move to Dubai for fear of an attack by figures from the Dutch underworld.

Turkish media reports say Akgün was a rival of Atilla Önder, an associate of Kees Houtman and allegedly involved in a plot to kill Önder who was allegedly engaged in a feud with a rival gang over the murder of his business partner. Önder had hired a hitman in Istanbul for an attack on the rival gang, and Önder's gang and members of a rival gang engaged in a clash in Istanbul that left four dead seven years ago. Both Önder and Ramazan Özarslan, the alleged leader of the rival gang, were detained in Istanbul months after the clash in a major police operation. Akgün allegedly had close ties with Özarslan's gang and was assassinated by Önder's gang, according to media reports. A funeral was held for Akgün at a cemevi, an Alevi prayer house, in Istanbul's Beşiktaş district. Akgün's mother and wife attended the funeral along with Akgün's relatives.

The second shooting occurred on Valikonağı Street of Istanbul's upscale Nişantaşı neighborhood on Wednesday night. Vedat Şahin, Ferdi Topal and Enver Aydın were walking on the street near Şahin's house when gunmen armed with AK-47 rifles opened fire on the trio. Şahin and Topal were killed and Aydın sustained injuries. The shooting shocked the relatively quiet neighborhood where houses were riddled with bullet holes in the wake of the attack. Security camera footage that emerged a day after the attack showed the shooting only took 20 seconds. In the footage, a red car is seen approaching the trio as they are walking on the sidewalk around 10:30 p.m. Three men in the car then started shooting. When the victims hit the ground, one of the men got out of the car and kept firing at the three men on the ground. He got back into the car and the gunmen fled. Investigators found 49 empty shells at the scene following the shooting.

Şahin was a well-known figure in the Turkish underworld, although his notoriety was overshadowed by his elder brother Sedat, who was convicted in several cases on charges of running a criminal gang.

Police sources said a gang known for their rivalry with Şahin is being investigated for the murder.

Sedat Şahin first made headlines for his alleged involvement in the murder of Hacı Çapan, who was reportedly behind the murders of two of Şahin's men in 1993. Çapan was shot dead as he was leaving a hospital in 1996. Şahin was also wanted for robbery and extortion and was allegedly backed by Alattin Çakıcı, a well-known mafia boss who is currently in prison. Şahin was captured in Germany in 1998 and extradited to Turkey in 2000. He was convicted of running a criminal organization and released in 2005.

Sedat Şahin was known for his feud with Hüseyin Saral, another gang leader. Saral was killed in Italy in 2005, allegedly by Şahin's men. Sedat Şahin was arrested after the murder and a prosecutor demanded life imprisonment for him. Turkish media outlets reported that Sedat Şahin and Saral's gang continued their feud after Saral was killed, and one day after his release in 2005, Şahin was detained once again on charges of an attack in Istanbul's Kadıköy district in 2004, perpetrated by his men, and for murder.

According to a prosecutor's indictment, Sedat Şahin was allegedly controlling Istanbul's nightlife scene and running an extortion scheme for popular nightclubs. He was also accused of threatening singers performing at nightclubs.

Vedat Şahin's family hired a private jet to transport his body to his hometown of Samsun in northern Turkey. A convoy of 300 cars accompanied Şahin and Topal's bodies to their burial site in Samsun, and local police took strict security measures during the funeral of the two men on Friday.

Two attacks on the same day raised suspicion of whether they were linked to each other. Police are investigating any likely connection between the murders while the media reported that Akgün and Şahin knew each other and were involved in criminal activities in the Netherlands together. Interior Minister Efkan Ala said he could "neither confirm nor deny" any connection between the shootings.

Still, the shootings are a reminder of the Turkish mafia's shadowy past and heyday in the 1980s and 1990s, during which mob bosses enjoyed close ties with the "deep state," a name attributed to a secret circle of politicians, intelligence service members, military and a powerful elite. Gang wars were a common occurrence and mob bosses often got away with murders while their minions took the fall for shootings, extortion and other crimes; those who landed in jail would continue running their gangs from inside. It all changed in 1996 after a thorough investigation into the links between the mafia and the "deep state" following a car crash in which a shady intelligence agent, accused of involvement in drug trafficking, and a prominent police chief were killed. In the following years, Turkey launched a major sweep, targeting mob bosses and after the Justice and Development Party (AK Party) came to power in 2002, the crackdown on mafia bosses, nicknamed "baba" (father), was expanded. Between 2004 and 2006, numerous mob bosses were detained and imprisoned on several charges.