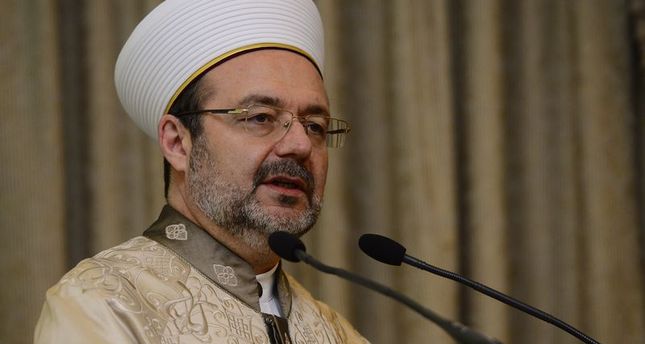 by Daily Sabah Dec 28, 2014 12:00 am
The country's top religious authority, Mehmet Görmez, the head of the state-run Presidency of Religious Affairs (DİB), announced on Sunday that Jerusalem would be included in the itinerary of pilgrims performing umrah or a lesser pilgrimage.

Görmez was speaking at an Istanbul event assessing the annual Muslim pilgrimage, hajj. He said that Jerusalem has long been a part of umrah in the Turkish history although it is excluded from itineraries at present. "We abandoned Jerusalem and handed it to another country but Jerusalem was not theirs, it belongs to Muslims," Görmez said, referring to Israel. "Jerusalem is the home of prophets and the sacred. Our ancestors had always paid a visit to Jerusalem while traveling to Kaaba [Islam's holiest site located in Saudi Arabia], but we neglected it. It was wrong," Görmez said.

He said that officials from the DİB will travel to Jerusalem next week to look into possibilities of enabling Turkish pilgrims to drop by Jerusalem during the umrah. "We will plan the travel in cooperation with the Foreign Ministry and other relevant authorities and by taking international relations into consideration. We don't know whether the trip will be via Jordan or somewhere else but definitely, we will offer this opportunity to the pilgrims applying to [the DİB]," he stated.

Jerusalem is home to al-Aqsa mosque, one of the holiest sites in Islam. Muslims' access to the site is often subject to severe restrictions by the Israeli government.

For its part, Turkey has strained relations with Israel after the infamous raid on a Turkish vessel and criticism of Israel by the government leaders over attacks on Palestinians. It is not known how Israel will respond to Turkey's request to allow masses of Turkish pilgrims into Jerusalem or specifically to al-Aqsa.
Last Update: Dec 28, 2014 4:36 pm
RELATED TOPICS