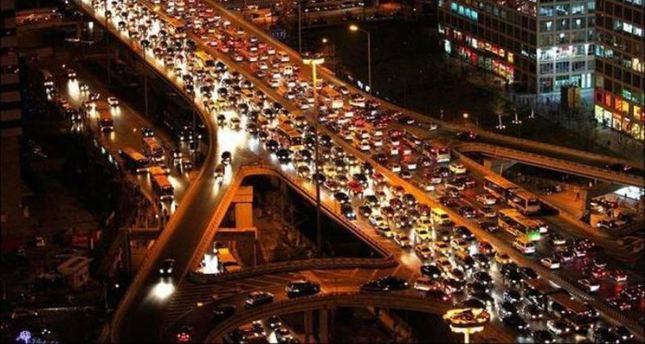 Istanbul's often-complained-about traffic congestion claims nine days from the lives of commuters every year according to a new study looking into the city's traffic figures, which was named the city with one of the worst traffic problems in the world.

The study, sponsored by Yandex, which offers online traffic information services, looked into the rate of vehicle traffic in Istanbul, the capital Ankara and main western city of İzmir.

Motorists and commuters spent an overall 438 hours in traffic jams in 2014, and the residents of Istanbul spend an average of 219 hours stuck in traffic, a figure which roughly corresponds to nine days according to the study. The number of additional hours spent in traffic is 114 hours for İzmir and 105 hours for Ankara, or about four days per year.

The study also looks at the hours in which traffic congestion peaks. For Istanbul, it is 7:00 p.m., while traffic jams are more common in İzmir around 18:50 and at 18:40 in Ankara. The morning rush hour begins at 6:50 a.m. in Istanbul, but traffic snarls reach their worst at 08:15 in the city. For Ankara and İzmir, the time which traffic jams peak is 08:30.

One of the worst times for motorists in terms of traffic jams was on October 2. On that day, tens of thousands of holidaymakers took to the roads on the eve of the Muslim festival of sacrifice "Eid al-Adha," leaving Istanbul for their hometowns all across the country. The result was a nearly 40-kilometer-long traffic queues stretching from the western part of the TransEuropean Motorway (TEM) in Hadımköy to Baltalimanı in the eastern part of Istanbul's European side. Occupants of countless cars had to wait for more than 10 hours to leave the city.

The TEM, along with the city's other major highway, the E-5, saw the highest rate of traffic in 2014. Kennedy Avenue, a 13-kilometer-long stretch of road which straddles the districts of Sirkeci and Bakırköy on city's European side was also burdened with heavy traffic throughout 2014.

The eve of Eid al-Adha was no different in terms of traffic for residents of Ankara heading out of town to celebrate the Eid holiday. For over six hours on October 2, motorists and their families or friends sat frustrated in their cars, waiting for traffic to be cleared.

Still, Ankara's traffic is no match to Istanbul, a city of 14 million which constantly receives new incomers. The city's notorious traffic problem is believed to cause an average of TL 6.5 billion ($2.8 billion) economic loss every year due to prolonged delays in travel, transportation of goods and the high level of gasoline consumption.

According to another study released earlier this year, some routes in the city that normally take about 29 minutes outside of rush hour, take 100 minutes during traffic jams.

Istanbul follows Moscow among the cities with the worst traffic in Europe. Authorities have so far failed to end the city's traffic problem despite several projects being launched to reduce the traffic flow, such as the Bosporus Tube Crossing project, an underwater road tunnel and a third bridge over the Bosporus.