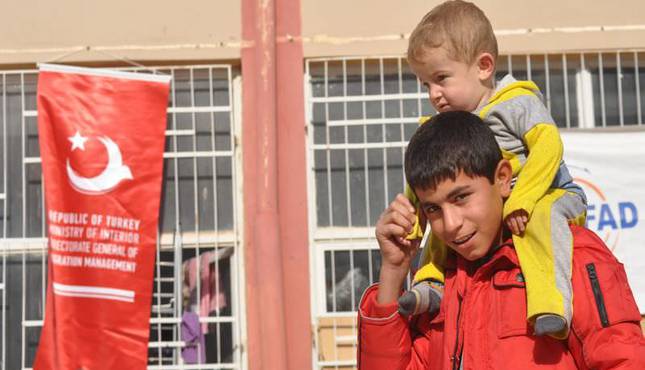 by Daily Sabah with AA Jan 03, 2015 12:00 am
Turkish Red Crescent has been providing psychological support to the children of families that have escaped from the clashes between the Kurdish groups and the self proclaimed Islamic State of Iraq and al-Sham (ISIS) in the town of Kobani (Ayn al-Arab), Syria, and have settled in Şanlıurfa, a southeastern province of Turkey.

Turkish Red Crescent has designated the 'Child Friendly Area' project in the refugee camps which were built by Prime Ministry Disaster and Emergency Management Presidency, AFAD Turkey, to minimize the psychological damage and negative affects on children, due to the ongoing conflict in their home country, Syria.

Turkish Red Crescent representative, Didem Yanardağ, speaking to an Anadolu Agency reporter, said that the project aims to keep children away from the conflict areas since the majority of those escaping from the crisis and seeking refuge in Turkey are children and children are the most effected victims of the wars.

"We are doing activities with the children and provide socio-psychological support in the joint project, 'Child Friendly Area', by Turkish Red Crescent and UNICEF, for the children between 4 and 18 years old. We engage in activities, such as drama, theatre, and morning exercise to keep them away from the intense environment they are in. The children get together with their peers and obtain an opportunity to overcome their unfortunate lived experiences of the war," said Yanardağ, form the Turkish Red Crescent.

The 'Child Friendly Area' project has drawn a great amount of attention from the children in the camps, and also great appreciation from the adults.

AFAD Turkey and Red Crescent has been the helping hand for the refugees coming from Syria due to attacks from ISIS and the Beshar al-Assad's regime forces.
Last Update: Jan 04, 2015 10:32 am
RELATED TOPICS