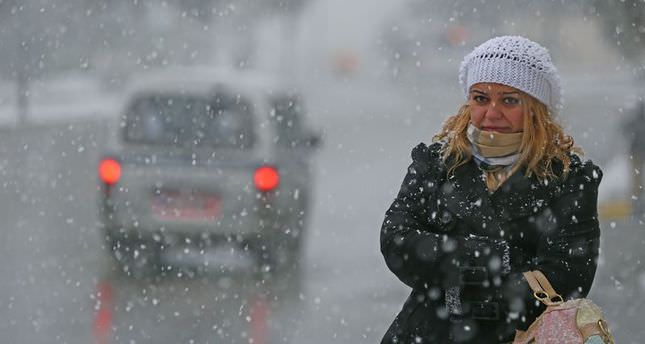 by Daily Sabah Jan 06, 2015 12:00 am
Heavy snowfall engulfed Turkey once more on Tueday, with Istanbul finally having its fair share of long-awaited precipitation.

Nonetheless, challenges to daily life lie behind the romantic scenes of white-capped trees and snowflakes pattering against windows.

Snowfall and blizzards dealt a blow to transportation, leading to the cancellations of flights and ferry services. Roads were closed in provinces hit by snowfall all across the country. Rescue crews rushed to help motorists stranded on snow-covered roads.

Roads to remote villages remain closed while major roads connecting cities such as Çorum and Amasya in central Turkey, Uşak and Manisa in the west and Erzurum and Bingöl in the east were closed for hours yesterday, either due to avalanches on the roads or severe blizzards. Even Muğla in southwestern Turkey, otherwise known as a sunny summer resort with relatively warm weather all year round, suffered from heavy precipitation.

Numerous accidents were reported all across the country yesterday due to the bad weather. In Karabük, a northern province, a shuttle bus carrying students crashed into the wall of a tunnel on the slippery road. A nine-year-old student was killed while 19 others were injured. The road connecting Istanbul to İzmir was also closed briefly after a truck overturned on the icy road yesterday.

For students, yesterday was a snow day with the bad weather leading to the shutdown of schools in almost every city affected by snowstorms. In Ankara, the governorate came under fire from parents as schools were closed in only nine districts instead of all across the Turkish capital, as it was battered by snow.

Likewise, schools were not closed in the northwestern city of Bursa, where the depth of the snow reached 20 centimeters.

Turkish Airlines announced the cancellation of some domestic flights and flights to Skopje, Budapest and Geneva, while crews worked round the clock to de-ice airplanes before take-off at Istanbul's busy Atatürk Airport. Ferry services between Istanbul and Bursa and Balıkesir were also cancelled throughout yesterday due to bad weather.

Strong winds accompanying snowfall knocked down electricity poles and tore roofs off buildings in some cities. In the city of Malatya, four people were injured when the tin roof of a tax audit office fell on passersby because of the severe winds.