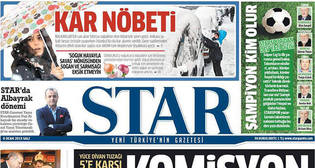 by Mehmet Çelik Jan 06, 2015 12:00 am
Turkish daily, Star, which belongs to the media group TurkMedya Group, has appointed its new editor-in-chief, following the removal of its previous editor-in-chief, Yusuf Ziya Cömert from the position by the daily's owner, Ethem Sancak.


Nuh Albayrak, who was previously the publishing coordinator of the same newspaper, has been appointed as the new editor-in-chief.

Nuh Albayrak, born in 1960, has previously worked for the Turkish daily, Türkiye, holding various executive positions, including the editor-in-chief position between 2007 and 2014. Albayrak had joined the Star in March 2014 as the publishing coordinator.