New project to provide aid to Syrians outside camps 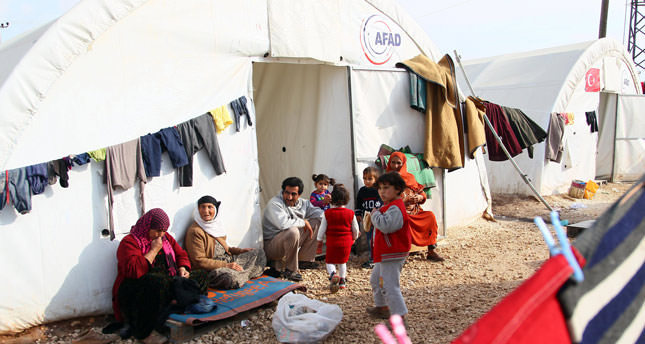 The Prime Ministry's Disaster and Emergency Management Authority (AFAD) in collaboration with the Office of the United Nations High Commissioner for Refugees (UNHCR) inaugurated a new project to provide health and education aid to Syrian children not residing in camps for displaced Syrians in the country.

AFAD President Fuat Oktay and U.N. High Commissioner for Refugees Antonio Guterres signed the agreement between the two agencies for distribution of aid, ranging from hygiene kits to stationary materials for Syrian students.

UNHCR will provide 12 mobile clinics, ten ambulances and ten vehicles to transport vaccines to AFAD in order to address the vaccination and healthcare needs of displaced Syrians not staying in the camps. In addition, 50,000 family hygiene kits supplied by UNHCR will be delivered to Syrians in the country, along with stationary materials for children attending schools. UNHCR will also provide fingerprint scanners for the registration of Syrians.

Mobile units will become the property of AFAD and the Health Ministry, and will be serve the country's public needs once the displaced Syrians return home.

Speaking at a conference of Turkish ambassadors in Ankara, Turkey's capital, yesterday, Antonio Guterres said that Turkey plays an important role in helping displaced Syrians. "It is essential to recognize that Turkey has experienced one of the largest refugee influxes in the world of the past few decades," he said.

Turkey's open-door policy for displaced Syrians seeking shelter in their country's northern neighbor has embraced over 1.6 million Syrians since the unrest in Syria evolved into an all-out civil war in 2011. The country has spent more than $5 billion for its Syrian "guests" - the official name for those refugees in Turkey with a temporary protection status. AFAD hosts 221,447 Syrians in 22 tent camps and "container cities" in ten provinces near the Turkish-Syrian border. For its part, UNHCR provides technical advice to Turkey on management of camps for the displaced, along with occasional material aid such as tents, blankets and kitchen equipment. It also supplies wheelchairs for disabled Syrians and funded vocational training centers for Syrians.

The country is struggling to cope with the massive number of people it hosts, as the international community dodges its humanitarian responsibility in aiding Syrians, leaving Turkey to bear the brunt of hosting the large number of displaced. "Only with a structured, multi-polar world, and with strong multilateral institutions, I think it would be possible to mobilize the international community to address the challenges of our time," Guterres said.