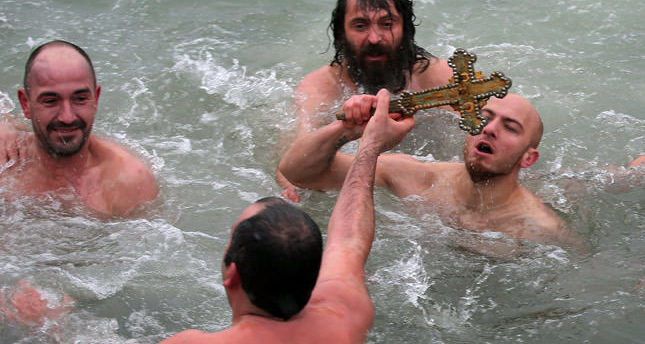 by Daily Sabah Jan 07, 2015 12:00 am
The Greek Orthodox community marked the Epiphany, the baptism of Jesus Christ, with a traditional ceremony during which believers jump into the sea to retrieve a wooden cross in Istanbul.

The faithful gathered at the Fener Greek Orthodox Patriarchate yesterday to observe the day with a mass presided over by Ecumenical Patriarch Bartholomew I.

The congregation then headed to the shore of the Golden Horn in the district of Balat on Istanbul's European side. The Greek Orthodox community of Turkey and Orthodox Christian believers from other countries attended the traditional race for the retrieval of a wooden cross from the sea. As Bartholomew threw the cross, 21 young men waiting aboard boats off the shore, leaped into ice-cold waters. Bulgarian citizen Todor Pasev managed to find the cross and return it to the patriarch who gifted him with a cross necklace.

Pasev brushed off praise for his strength to swim on a day where temperatures were freezing. "Staying there for 10 minutes would not kill anyone. After all, it is an important day for the Christian community," he told reporters. Another ceremony was held in the district of Ortaköy, but only one person dared to jump into the water.