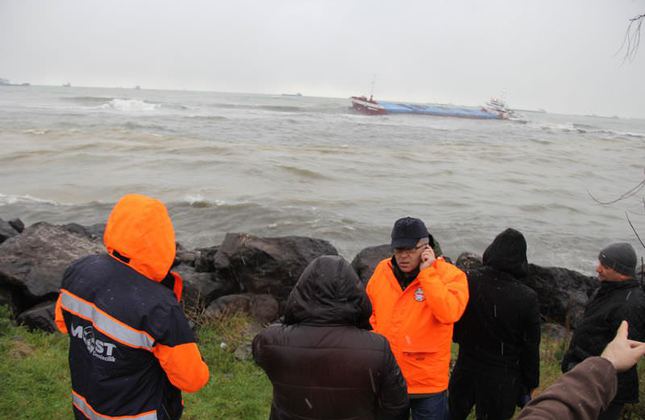 by Anadolu Agency Jan 07, 2015 12:00 am
Bad weather battering Turkey has stalled rescue efforts to save 10 seamen trapped on a cargo ship, which ran ashore near the northern port of Samsun.

The "Gulf Rio" was en route from Ukraine but began to drift as one of its two anchors broke free in the early hours of Wednesday morning due to heavy seas, said Aydin Unal, chairman of Samsun Port.

Turkish coast guards were prevented from reaching the vessel due to high waves; a helicopter is now expected to be dispatched to the scene to rescue the 10-strong crew.

Unal said the situation was not critical and teams had been working since dawn to rescue the ten people on board.

The cargo vessel – which is carrying a shipment of soybeans - ran ashore as it was nearing the port in the northern coastal province of Samsun.

Efforts to rescue people and the vessel are continuing, added Unal.