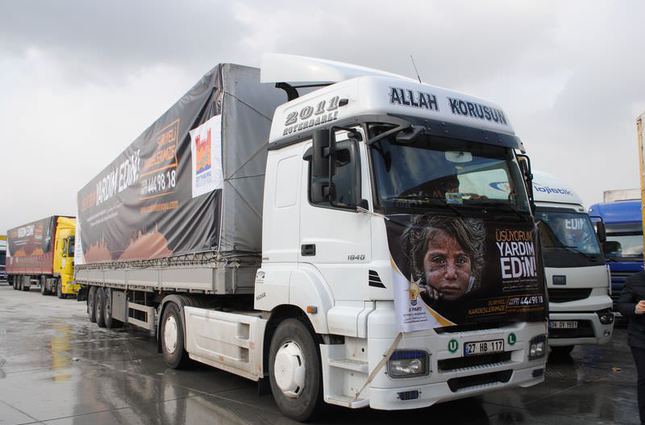 by Daily Sabah Jan 08, 2015 12:00 am
The Istanbul branch of the ruling Justice and Development Party (AK Party) has dispatched 134 trucks full of humanitarian aid for Syrians living in the southeastern Turkish province of Şanlıurfa.

The aid project was part of a campaign spearheaded by AK Party Istanbul titled "Üşüyorum, Yardım Edin (I am Cold, Help Me)."

AK Party Istanbul branch chairman Aziz Babuşçu said the current cold weather poses a threat to thousands of Syrians in Turkey. He said more aid trucks will be sent in the coming weeks. The aid includes 123,000 blankets, 17,000 heaters, 297,000 winter clothes, 50,000 shoes, hygiene kits and diapers as well as 200 tons of food and 9,000 toys. Wheelchairs and cradles for infants were also sent to Syrians.

AK Party supporters also set up a warehouse in Şanlıurfa, which hosts nearly 80,000 Syrians in state-run camps as well as over 100,000 displaced people who arrived in September after fleeing the clashes in Kobani, Syria. Aid materials will be stored in the warehouse for the continuous delivery throughout winter.

Babuşçu said Istanbul residents had expressed huge interest in the campaign. "We set up a call center for donations and it was flooded with calls every day. Thus, we managed to accumulate a large amount of aid in a short period time," he said.