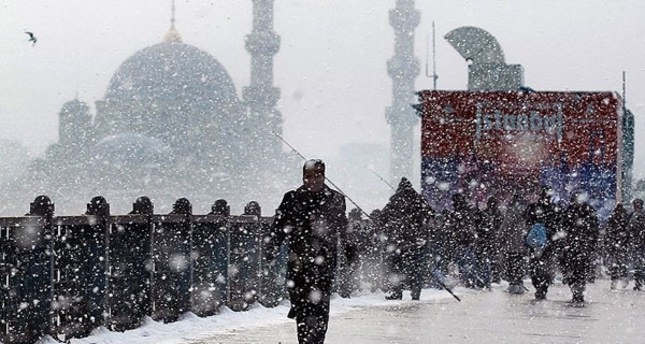 by Daily Sabah Jan 08, 2015 12:00 am
Turkey struggles to cope with bad weather as snowfall disrupts daily life across the country from the beginning of the week.

Forecasters warn that the snowstorms will continue today, and a new weather pattern of blizzards and extremely cold temperatures will drift toward the Marmara region in western Turkey from the Black Sea region in the north. Snowfall will remain heavy in the western Black Sea region, where provinces including Kocaeli and Zonguldak are located, as well as in the eastern parts of the region and in Eastern Turkey.

Istanbul will see a significant drop in temperatures today, up to minus 5 degrees Celsius according to forecasters. Snowfall that continued throughout Tuesday and yesterday left the city covered with a blanket of snow to a depth of 15 centimeters on higher ground.

Ferry services as well as numerous flights were cancelled yesterday, as they were on Tuesday. Experts warn that transportation may be affected again today with the worsening weather conditions.

Schools were closed yesterday and today in many provinces hit by snow, from Istanbul to Hakkari in the southeast, and Giresun in the north. Roads to hundreds of villages were also closed yesterday due to snowfall blocking the traffic. Roads to Konya province in central Turkey, a main passage in Bolu Mountain in northern Turkey which connects the country's northwest to central and northern Turkey, and a major road connecting İzmir in the west to the capital Ankara, were also closed due to heavy precipitation on Tuesday and yesterday.

People were stranded on the roads as snowfall and avalanches closed the roads. Disaster and Emergency Management Authority (AFAD) crews delivered food to motorists stranded on roads connecting the western city of Afyon to nearby provinces. Buses breaking down in bad weather in the northwestern city of Bursa led to traffic snarls. Municipality crews strove to keep the streets clear of snow throughout the day. High-speed train travel from Konya to Istanbul also broke down amid heavy snow. Passengers were stranded in the train for nearly three hours before a replacement train was sent for. In the eastern city of Erzurum, strong winds blew the roofs off buildings.