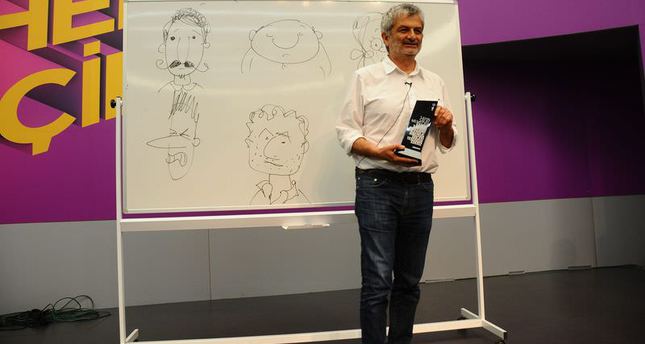 by AA Jan 09, 2015 12:00 am
Turkish cartoonists have reacted to the attack on the French satirical magazine Charlie Hebdo in Paris, describing it as "terrifying."

"No opinion or no caricature justifies terror," Salih Memecan, a well-known Turkish caricaturist, who draws for daily newspaper SABAH, told The Anadolu Agency. "You may not like the cartoon or hate it, but your reaction should not be that."

The footage of the gunmen shooting mercilessly at a policeman lying injured on the ground, outside the magazine's offices, sent shockwaves across the world.

The tragedy has resonated especially strongly in a country where editorial cartoons are very much a part of the political landscape.

"Unfortunately, there are a lots of people around who have hateful intentions or may attack you by using your cartoon as an excuse," Memecan added. "Humorists should not be afraid of their actions and they will not."

"Islam is a religion of sympathy and tolerance but there may be some who perceive this in a different way," the cartoonist noted. "We should not give these people a chance (to act). We should take every kind of measures against them."

Satirical Turkish weekly magazine Leman, which published a joint issue with Charlie Hebdo in 2002, colored its official webpage in black and wrote the words, "Je Suis Charlie," meaning "I am Charlie," to communicate their sorrow over the deadly attack.

"We are in shock. I think this massacre is a black milestone for the world," Zafer Aknar, managing editor of Leman, told The Anadolu Agency. "It is a terrifying incident. I cannot find any word to say."

On his Twitter account, Tuncay Akgun, editor-in-chief of the same magazine, issued a message saying, "They (French cartoonists) were our friends." He also tweeted a photo of Charlie Hebdo cartoonist Georges Wolinski sitting in a yard of a mosque during a visit to Turkey.

"He (Wolinski) was one of the best, tolerant men in the world," Aknar said. "If the attackers had known him, they would not have done that."

Erdil Yasaroglu, another caricaturist of the weekly satirical magazine Penguen, also denounced the attack, releasing a Twitter message saying, "It is terrifying to respond to a caricature with a gun."

The magazine depicted its trademark penguin in tears as a tribute to their French colleagues. On its Twitter account, the magazine wrote, "We are very saddened. We will dedicate our next issue to Charlie Hebdo and continue to draw."

Asim Gultekin, editor-in-chief of another weekly satire magazine Caf Caf, described the attack as "saddening." "Those who conducted the attack played a disgusting game," he said. "It seems it is an incident, which aims to increase racist attacks."

Charlie Hebdo sparked controversy in 2006 and 2012 for publishing comic cartoons of the Prophet Mohammed, some of which had been first been published by Danish magazine Jyllands-Posten in September 2005.

"Humor should be done cleverly and politely, not attacking the religious values," added Gultekin however. "Modern Europe may forget this sometimes. When they forget this, some dark forces can act wrongfully against them."