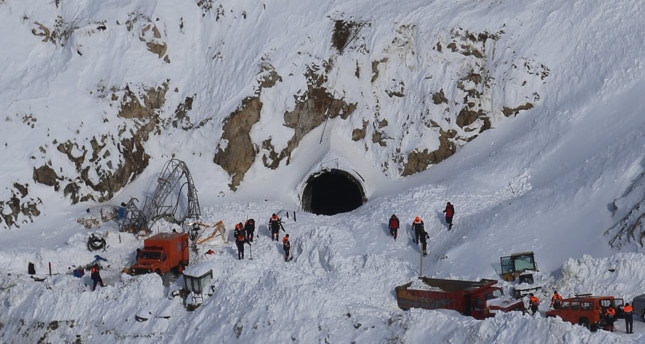 by Yusuf Ziya Durmuş Jan 12, 2015 12:00 am
Snowfall and storms have killed four people in northern Turkey while eight others remain missing.

An avalanche in the northern Turkish city of Trabzon killed a worker and trapped four others on Saturday. Three fishermen drowned while four others went missing during a fishing trip in the northern province of Samsun when their boat capsized in stormy weather.

Rescue efforts were underway yesterday for the missing workers in Trabzon, but bad weather dealt a blow to the search. Five men were at a tunnel construction site in Trabzon's Çaykara district to repair a malfunctioning generator when the avalanche hit. Nusret Er's body was recovered by search and rescue crews on Saturday and four others remain trapped. Media outlets reported two of the workers were inside a vehicle when the avalanche struck.

The state-run Disaster and Emergency Management Authority (AFAD) dispatched teams to the area to recover the missing workers. A statement by AFAD said heavy snowfall and a severe blizzard slowed down the efforts. The Turkish Armed Forces (TSK) also sent helicopters to the area to join the search, but they could not participate due to bad weather, which prevented them from flying. Crews managed to reach the spot where the snow had a depth of more than two meters 22 hours after the avalanche.

Crews advanced with difficulty to reach the area because small mountains of snow blocked the roads. A number of vehicles carrying crews were also stranded on the snowy roads while a snowplough overturned. Meanwhile, crews were able to rescue 40 other workers trapped at a snowbound construction site.

Northern Turkey, also known as the Black Sea Region, is home to steep mountain ranges where avalanches are common. In January 2009, 10 people were killed when an avalanche struck a group of trekkers on Mt. Zigana in the Black Sea province of Gümüşhane.

In the Samsun accident, seven people were aboard a small fishing boat when it capsized in a violent snowstorm. Dursun Namlı, 30, aboard the boat, tried to swim to the shore and was found and carried to the hospital by fishermen waiting ashore. He later died in hospital. Two more bodies were recovered later yesterday.Authorities said these men ignored the warning against fishing in the lake during bad weather.

Turkey is battling bad weather that is bearing down across the country. Snowfall and blizzards have closed down hundreds of roads in the Black Sea Region and other regions with temperatures dropping below zero Celsius. Snowfall is expected to be replaced by rainfall on Monday and temperatures will rise nationwide on Wednesday, as a new, sunny weather pattern will cover the country.