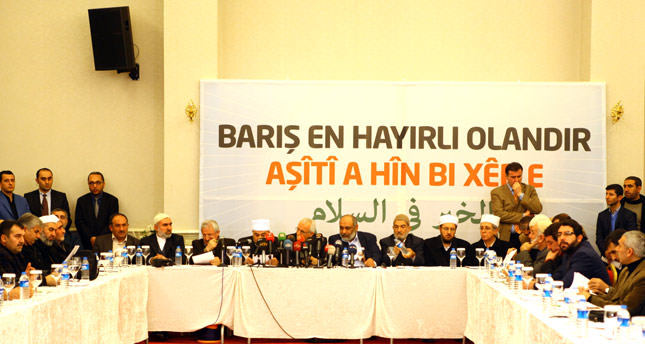 by Mehmet Çelik Jan 12, 2015 12:00 am
Nongovernmental organizations, opinion leaders and Muslim scholars from predominantly Kurdish regions of Turkey came together in the southeastern province of Diyarbakır to discuss Turkey's reconciliation process to end the Kurdish question. In a joint declaration, participants said the solution to the question cannot exclude different views and noted the importance of contribution by conservative members of the society to the matter.

The summit was organized by the Humanitarian Relief Foundation (İHH) on January 10 and participants including representatives of over 750 nongovernmental organizations, opinion leaders and Islamic scholars from 20 provinces in eastern and southeastern provinces, signed a joint declaration at the summit.

The declaration, read in Turkish, Kurdish and Arabic emphasized the concept of brotherhood and the consistency of the reconciliation process.

It suggested that an inclusive reconciliation process would make the solution easier and gain the support of people. "[The PKK] and its prototype understanding and approach to the issue, intimidation of the conservatives and intolerance to other identities are some of the most important obstacles to the peace and reconciliation process," it said, referring to the terrorist organization which has pledged to lay down arms in the wake of the announcement of the government's reconciliation process.

Nizamettin Yakışık also answered the same question stating: "The attempt here is to state that we are also a voice that wants the bloodshed to stop, and whoever offers an inclusive solution of justice and brotherhood, we will support them"

Peace and Democracy Party (BDP) deputy, Altan Tan, was also present at the meeting. Answering the questions after the press release, Altan said that the voice of the conservative NGOs and parties is an important initiative that would be beneficial for the reconciliation process.

The reconciliation process, that attempts to end the campaign by the PKK and restore the rights of the Kurdish community, had started during the prime ministry of President Recep Tayyip Erdoğan in 2009, and had become a law on July 16, 2014 as "Ending Terrorism and Strengthening Social Integration Law."