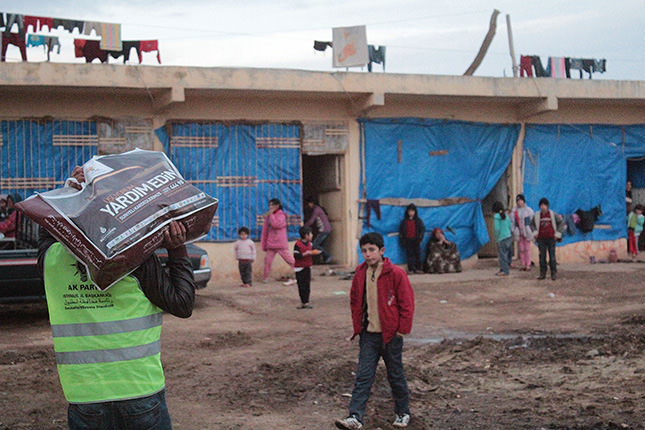 by Compiled from Wire Services Jan 12, 2015 12:00 am
Aid collected in a campaign by several charities and the Istanbul branch of the ruling Justice and Development Party (AK Party) to help displaced Syrians has been delivered to the needy in the southeastern province of Şanlıurfa.

The "I am Cold, Help Me" campaign handed out 134 trucks of aid to needy Syrians. The aid includes 123,000 blankets, 17,000 heaters, 297,000 winter clothes, 50,000 shoes, hygiene kits and diapers as well as 200 tons of food and 9,000 toys. Wheelchairs and cradles for infants were also sent to Syrians. A warehouse was also set up in Şanlıurfa, host to nearly 80,000 Syrians in state-run camps as well as over 100,000 displaced people who arrived in September after fleeing the clashes in Kobani, Syria. Aid materials will be stored in the warehouse for the continuous delivery throughout winter.

One of the trucks sent to Şanlıurfa was converted into a bakery. The truck, which will stay in the province throughout the year, will serve 20,000 loaves of bread daily for Syrian refugees. A charity shop was also opened in Şanlıurfa. Syrians will be able to pick from among the donated clothes at the shop which will remain open until spring.

Aid was delivered to families in Şanlıurfa and Suruç, a town in the province where a large population of the displaced from Kobani now resides.

Speaking to Anadolu Agency in Şanlıurfa, Aziz Babuşçu, head of AK Party's Istanbul branch, said they saw that a more comprehensive campaign was needed when they arrived to deliver the humanitarian aid. Babuşçu said the campaign showed the need for such aid projects instead of personal, small-scale donations to help the needy Syrians.