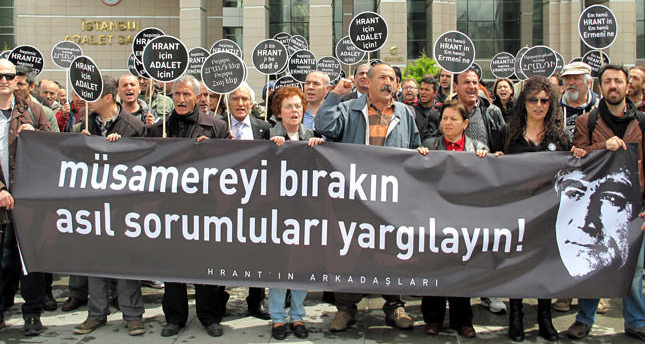 A court in Istanbul yesterday approved a prosecutor's request for the capture of Muhittin Zenit and Özkan Mumcu, two police officers from the Turkish National Police's intelligence department. It is the first time that arrest warrants have been issued for police officials in the investigation of the murder of the Turkish-Armenian journalist. The case sparked controversy after allegations that a number of police chiefs, including those with ties to the Gülen Movement, ignored the intelligence regarding the murder plot.

Muhittin Zenit and Özkan Mumcu were police officers at the Trabzon branch of the Turkish National Police at the time of the murder. Ogün Samast, a convicted murderer of the outspoken journalist and a native of Trabzon in northern Turkey, had traveled to Istanbul from his hometown. According to an indictment by the prosecutor investigating the murder, several police officers were aware of the plot.

Zenit and Mumcu were recently released by a court that imposed a ban on their travel abroad after they testified in the investigation. Two police officers were charged with causing death by negligence and misconduct by Prosecutor Gökalp Kökçü after they were questioned on December 26, 2014.

The prosecutor objected to the release and appealed to the court. Another court looking into the case ruled for issuing arrest warrants for the two policemen whose whereabouts remain unknown.

Turkish media outlets had released a phone recording, reportedly between Zenit and Erhan Tuncel, the alleged mastermind of the murder plot. Tuncel was working as a police informant prior to the murder. The phone conversation shows Zenit had knowledge of the murder but did not inform Istanbul police.

The prosecutors also interrogated former police intelligence director Sabri Uzun and intelligence chiefs Ramazan Akyürek and Ali Fuat Yılmazer, two senior officials with reported links to the Gülen Movement. The Gülen Movement, run by U.S.-based cleric Fethullah Gülen, is accused of running a "state within state" through its infiltrators in the police and the judiciary. The movement is reportedly behind controversial trials that have seen the imprisonment of military officers, journalists and critics of the group.

An investigation by previous prosecutors who worked on the murder case revealed that they dismissed allegations about Akyürek and Yılmazer. Sabri Uzun, who was head of the National Police Intelligence Department, had claimed his subordinates hid tip-offs warning about the murder of Dink. Questioned about the murder, Uzun said Yılmazer hid an intelligence report from him regarding a plot to kill Dink.

Yılmazer is currently in prison for a separate case involving illegal wiretapping, while Akyürek was removed from duty amid a major reshuffle in Turkish law enforcement last year. Earlier, he was suspended over allegations of destroying and leaking secret documents regarding the Dink investigation. Testifying to prosecutors recently, Akyürek admitted that he was aware of a planned murder regarding Dink after one of his subordinates presented him with an intelligence report. He told prosecutors he did not remember the details and thought that the Istanbul and Trabzon police directorate had "taken necessary measures."

Ogün Samast, who is currently in an Istanbul prison for Dink's murder, told prosecutors that Trabzon police helped him and his accomplices and said Ali Fuat Yılmazer and Ramazan Akyürek had knowledge of the plot in his new testimony last year.