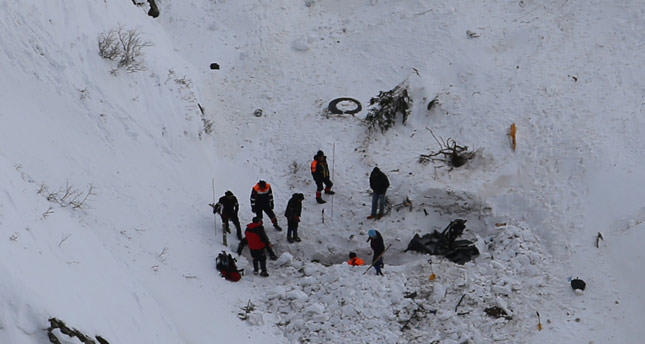 by Daily Sabah Jan 13, 2015 12:00 am
Search and rescue efforts for two workers buried under an avalanche and four fishermen who went missing after their boat capsized in a lake in northern Turkey resumed yesterday. However, the likelihood of survival remains scarce as crews had to pause efforts on Sunday night due to darkness and deteriorating weather conditions.

Seven men aboard a boat were on a fishing trip in Gıcı Lake in the northern province of Samsun when it capsized in a severe storm. Three bodies were found on Sunday but the search for the others including a 15-year-old boy was called off as night fell. Divers restarted combing the lake yesterday. Eyewitnesses said the men went on the fishing trip despite warnings from fellow fishermen about the storm.

Samsun, like other cities in the Black Sea region in northern Turkey, is beset with bad weather. Strong winds knocked down trees and pylons in the city while boats anchored at a dock on the city's Black Sea shore sank in the storm.

The situation of two workers trapped under an avalanche in the province of Trabzon is more critical as no trace of the men were found on the third day of search and rescue efforts. The body of three workers, who were repairing a broken generator at a construction site when an avalanche struck on Saturday, were recovered on Saturday and yesterday. Again, the search was called off on Sunday night due to low visibility and snowstorms and resumed yesterday. Crews from the state-run Disaster and Emergency Management Authority (AFAD) combed the area for potential survivors. A number of vehicles, including one used by the missing workers were found yesterday at the site as snowplows cleared off more snow from the area. The risk of a new avalanche at the scene has obstructed the efforts.