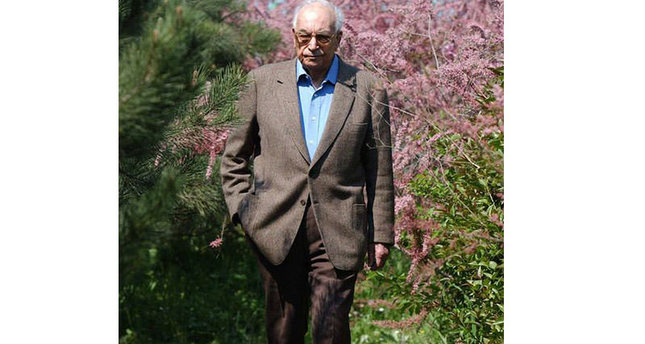 by AA Jan 15, 2015 12:00 am
One of Turkey's most famous living writers, the country's first candidate for the Nobel Prize in Literature and an outspoken intellectual, Yaşar Kemal, is critically ill.

The 92-year-old author, whose works have been published in dozens of languages, was hospitalized on Wednesday in Istanbul due to respiratory problems.

Kemal, who wrote more than 20 novels and nearly 10 experimental works, besides short stories, is also famous for recreating Turkish as a literary language.

Although the Turkish health minister announced on Thursday that Kemal is recovering, the author remains in an intensive care unit and his condition is still critical.

Kemal is now receiving admirers' and followers' blessings; Semih Gumüş, one prominent literary critic, is among them.

"No matter what we say to describe Yaşar Kemal, it will be not enough. He is the matchless writer of Turkish literature," said Gümüş.

Stating that no work will be sufficient to depict him and his achievements, Gümüş added: "When we think about the works to be written to depict Yasar Kemal, we can notice that one face of our literature is doomed to stay in shade."

Having both Turkish and Kurdish origins, Kemal was born in 1923 in Osmaniye in southern Turkey. Losing his right eye due to a knife accident, the writer had a difficult childhood.

Kemal first worked as letter-writer for illiterate citizens in small villages, then became a journalist and finally a novelist, always believing in "human beings and nature," defining his art as "being at the proletariat's service."

"I am against those who oppress and exploit the people; it does not matter whether oppression comes from feudalism or the bourgeoisie. Whoever is preventing the happiness of the public, I am against it with my art and with my whole life," Kemal said in a 1971 newspaper interview.

The theme of "art for people's sake" dominated Kemal's literary studies and he merged this theme with his political thought.

"Think about 'Ince Memed' [My Hawk-Kemal's most prominent work] which has already sold more than one million copies over 60 years and is still being sold today just like a brand new novel," Gumus says.

Receiving international acclaim for Ince Memed (My Hawk) which was firstly published in 1955, Kemal used a mythological hero - the eponymously named Ince Memed - to criticize society and its values. In the novel, Memed runs away to the mountains due to the oppression of the Agha (landowner).

Published in 40 languages, Ince Memed was also based on the lives and sufferings of Anatolian people.

According to Gümüş, the main issue for Yaşar Kemal in his works is the nature of human beings, the corruption created by social factors and the effects of this corruption on the inner world of people.

Kemal said in a 2008 interview with U.K. newspaper The Guardian: "I don't write about issues, I don't write for an audience, I don't even write for myself. I just write."

"That is why he did not write of 'there' or 'here', he wrote the novel searching for universal values," says Gumus.

Gümüş adds: "I have defended the Turkish which was used by Yaşar Kemal for writing tens of cult novels, as a fully self-sufficient literary language."

Including the Cino del Duca World Prize in 1982 and the Legion d'Honneur in 1984, Kemal has been awarded with many international and domestic prizes.

Kemal was not only a successful novelist but a sensitive citizen and activist. "He always took a firm stand against fascism and reaction. To understand how Yaşar Kemal is a kind and honest person, you need to know him closely," Gümüş says.