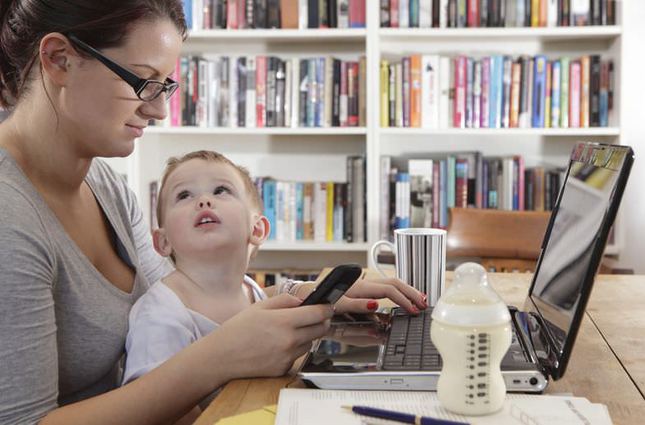 Last week, Prime Minister Ahmet Davutoğlu announced new incentives for working women to have children, such as the ability to work part-time with full pay.

"We will provide mothers with the opportunity for part-time work after they exhaust the normal paid maternity leave of 16 weeks," Davutoğlu said in Ankara last week as he launched the government initiative "Program on the Protection of Family and Dynamic Population Structure."

He said that working mothers will be able to work part-time with full pay - immediately following maternity leave - for two months if they have one child, four months with two children and six months with three or more children.

The prime minister also stressed that both parents would have the right to work part-time for half the pay until their children reach 6-years-old, the age to start school.

Şaşmaz, who was working as a writer for a TV channel before quitting her job, is now a housewife and takes care of her little boy. She believes the presence of a child's mother is essential to his or her development.

"Children call babysitters 'mom' as they cannot properly see their own mother when they work full-time," she said. "It is a sad situation."

Mehmet Işıker, a psychologist in the southern province of Osmaniye agrees. "Children need the constant love and care of their mother until they reach 6-years-old. Absence of the mothers [during this period] causes psychological problems for children," he said.

Still, Şaşmaz neither supports working full-time with a child nor having to quit a job to raise one. "If I worked part-time, I would have made my child and husband happier," she stressed, adding that she does not feel satisfied by the fact that she does not work. "If a mother is happy, her child and her husband will be happy as well."

Türkan Selamet, 47, a manager of a nursery in Istanbul, also insists on the importance of part-time work for mothers' well-being. "I see many mothers around me fall into depression as they cannot work because of their babies, or [they] feel guilty because they cannot take care of their children properly when they work full-time," she said.

However, the proposed regulations will "not encourage those who do not plan to have a baby," Şaşmaz added. "You cannot make the decision to have a baby only because of the support of a regulation."

Gül Özdemir, 28, a public relations specialist at a beauty center in Istanbul holds similar views: "Of course, [the government's plan] sounds good, but I cannot start thinking of having a baby with this initiative; I do not trust that the private sector will apply it to part-time work [for new mothers]."

While announcing the initiative, Davutoğlu said that the aim was to increase the fertility rate from 2.1 percent to 3 percent in the long-term. There have been worries in Turkey about the aging population of Turkey in recent years; the youth population rate is expected to decrease to 21.2 percent in 2023 according to Development Minister Cevdet Yılmaz.

Academics do not think the government's moves regarding mothers will contribute to population growth in the country. "We don't expect big changes to the population after this package," said Alanur Cavlin, an associate professor of the Institute of Population Studies at Hacettepe University in Ankara. "There is no such example of a population change in the world."

Didem Danış, an associate professor of the Department of Sociology at Galatasaray University in Istanbul, said that a fertility policy is not enough on its own to foster a dynamic population. She suggests the government develop its migrant policy as well. "Germany does this. Many countries in Europe accept immigrants by specifying their needs, in a controlled manner. They prevent decreases in their population through this way. Immigrants coming to Turkey will also contribute in the dynamism of the population," she said.