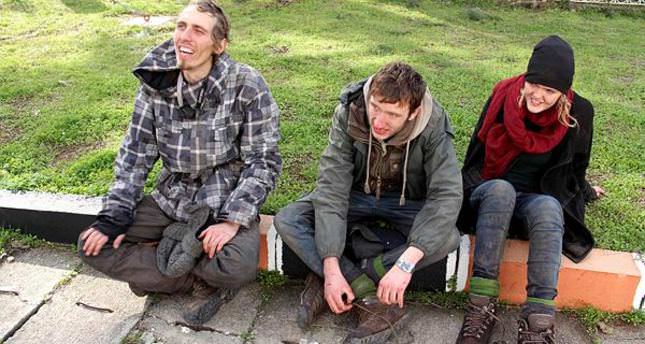 by Daily Sabah Jan 18, 2015 12:00 am
A British national and two Dutch citizens, who went missing while trekking in southern Turkey three days ago, have been rescued on Monday.

Three exchange students were scaling the Lycian Way, a challenging trekking route, when they informed authorities by phone that they had got lost on Jan. 16.

David Alan Mackie from the United Kingdom, Marije De Groot and Friso Anne Antoney De Vries from the Netherlands, all 21, set out from Kemer in the southern Turkish province of Antalya for the Antalya part of the Lycian Way, a 540-kilometer footpath stretching from southwestern Turkey's Muğla to the southern province, on Jan. 14. They were on a trip to the province after a break from their studies at Istanbul's Boğaziçi University and Kadir Has University, where they are enrolled as exchange students.

The Disaster and Emergency Management Authority (AFAD), the state-run agency which coordinated search and rescue efforts for the missing students, announced yesterday that they were able to detect the location of the trio via their cellphone signals. The students were transferred to a hospital in Kemer by helicopter from the spot they were found. Doctors said the students did not suffer any health problems and would be discharged from hospital soon.

Christopher Mackie told reporters that he appreciated the efforts of the Turkish authorities in locating and rescuing his son and said that the family would remain grateful to them. Mackie said his son had told him about his plans to go trekking but "they would have never guessed that he would get lost."

Annehe de Vries praised the rescue efforts for her daughter and other students and said she didn't expect so many people to search for her daughter. AFAD dispatched 88 rescue workers, sniffer dogs and two helicopters, in coordination with the army, and local search teams to find the missing students.

Dr. Levent Mumbuç, a physician from the Kemer hospital where the students were examined after their rescue, told reporters that the students had no health problems, and neither bruises or cuts. He said the trio fed on insects and fruits they found in the wilderness and drank water from a river for survival. "These kept them alive and strong. They told us that they survived the cold weather at night by sleeping together and embracing each other. They only suffered from weakening of their muscles and fatigue," Mumbuç said.

Officials said that the students' endurance and perpetual search and rescue efforts helped to find them safe and sound. They noted that the three students were found on a steep area exposed to snowfall and fog as they sought to climb above to make themselves visible to any helicopters they expected to come looking for them. Authorities said the students, who had desribed the area they had gone missing in during their first contact with emergency services, were found far away from their original spot as they likely walked in the hope of reaching an inhabited place.