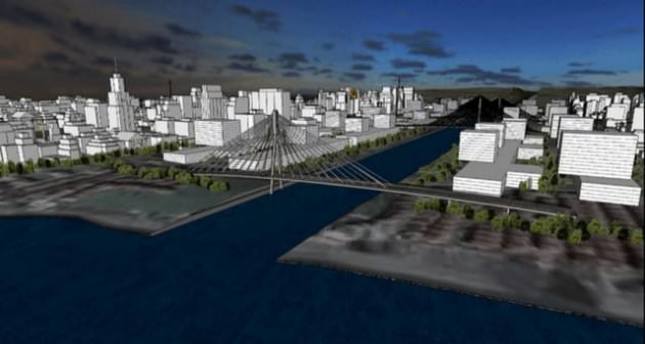 by Zeynel Yaman Jan 21, 2015 12:00 am
Initiated by the Turkish Environment and Urban Development Ministry in 2011, an new urbanization project covers the new airport, and railway and transportation networks aside from settlement areas. The residence population will be limited to 500,000 people within the KanalIstanbul (Canal Istanbul) project to preserve the environmental pattern of new settlement areas in Istanbul's northern parts, including the districts of Kayabaşı, Başakşehir and Arnavutköy. It has been decided that a well-organized settlement area will be built near the new airport in a bid to reduce dense housing and population in the city center. Başakşehir, Kayabaşı, Küçükçekmece and Kemerburgaz will feature newly-designed business centers and settlement areas. The urbanization project includes hospital construction, recreational areas, a university, educational institutions and other public areas. Additionally, the region will become a center of attraction with a giant fair, health and other service industry centers. Some financial centers, especially those situated in central but restricted parts of the city, will relocate and move to the project area. Primarily centered in Kayabaşı, the project area will first house 500,000 residents, with the number increasing to 700,000 in the following periods. The urbanization projects are conducted by the Housing Development and Administration of Turkey (TOKİ). Described as a dreamy urban area that can generate its own energy, the new settlements will be earthquake-resistant. To avoid possible environmental risks, the population will be reduced from its current rate that is 1.5 million people.

The public works of new railway and subway networks within the area have been designed in line with the project conditions. There are also predictions that the possible population increase around the project zone may cause an unfavorable environmental impact, and there is the possibility that residents outside of the project area may want to move there. To sustain the ecological balance, high and multi-storey buildings previously planned by TOKİ will be avoided, and instead there will be medium-height buildings such as five-storey apartments. The areas which have not yet been zoned for housing will be examined, and dense housing will be prevented and the height of buildings will be limited. The project area will be accessible via subway and high-speed train. The regulations, which have been recently decided, will exclude certain sections of the project including a health campus, educational buildings and specified public investments.