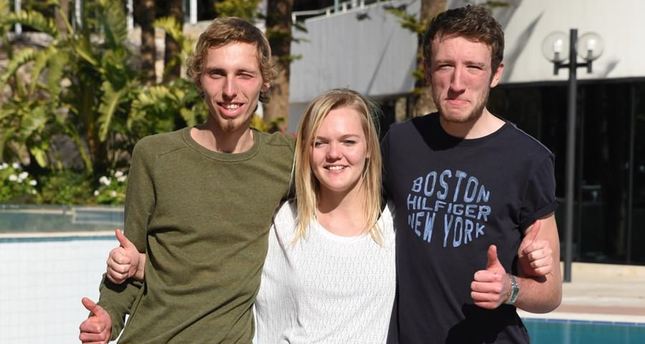 Three exchange students attending universities in Istanbul, David Alan Mackie from the United Kingdom, Marije De Groot and Friso Anne Antoney De Vries from the Netherlands, went missing six days ago in the wilderness of the southern Turkish city of Antalya. The trio, all 21 years old, were found by rescue crews on Monday.

They spoke to reporters yesterday about their ordeal, and how a sudden resumption of power in one of their cellphones helped them to contact emergency services to locate their position. The students, who were in Antalya for a trekking trip along the famous Lycian Way, related their survival to reporters at the hotel they were staying in after they were discharged from the hospital they were transferred to on Monday. Mackie said they learned about the trekking route from a website and decided to visit the Lycian Way, which runs from the southwestern city of Muğla to neighboring Antalya for about 540 kilometers. Friso De Vries said they were lost on the first day of their expedition after darkness set in sooner than they expected and rainfall began.

David Mackie said they were able to see the city below the spot where they went missing, but steep cliffs and a river stood between them and the city. Also, they could not walk because they were starving.

De Vries said they first tried to cross the river and climbed to the higher ground for a better cellphone reception, to no avail. He said the batteries of their cellphones soon, died but one of them started working again, with a two-percent power level mysteriously restored on Jan. 16. They immediately called the emergency services. Soon, rescue crews were converging on their likely location, and the trio were spotted by a military helicopter combing the area as part of search and rescue efforts.

The students said that hunger was the greatest challenge, and they had to eat insects for survival. After fatigue took over following a grueling climb to the higher ground, they took shelter in a cave. They occasionally stepped out of the cave, waiting to be spotted by a helicopter or plane but when it did not arrive, they started walking again. De Vries said although it was cold at nights, they could not light a fire since their matches were wet because of the rainfall. That was when they decided to do what they had watched in a documentary: urinating into their water bottles. They tried to keep warm by strapping the urine-filled bottles to their bodies. David Mackie said they had nothing to eat during their disastrous trip and it had been a real "Survivor" experience for them. They said they prayed for rescue teams to arrive and were worried when a helicopter flying overhead could not see them. They gave up hope then, only to see the helicopter returning after a while. Turkish authorities had earlier announced that the helicopter could not land at the spot where they were located. The trio was hoisted up by helicopter later.

Mackie, De Vries and De Groot thanked the rescue teams and said that they would leave for their countries on Thursday. Answering reporters' questions about whether they would go on a similar trip in the future, all three said they liked camping, but they would take precautions before setting on such a trip next time.

The Lycian Way, marked out in 1999, lies between the coast and mountains and runs from Fethiye in the province of Muğla to Antalya. It is named after the Lycian people who lived in the area in ancient times. The trek gives the opportunity for trekking professionals to visit largely unspoiled footpaths. It is dotted with villages, although long sections of the way is a long distance from residential areas. Local authorities announced that a series of measures would be taken to prevent a repeat of missing amateur trekkers. This will include the requirement of a permit for entrance to the canyon, the starting point of the Lycian Way in Antalya.