Unpaid bills pit utilities against each other 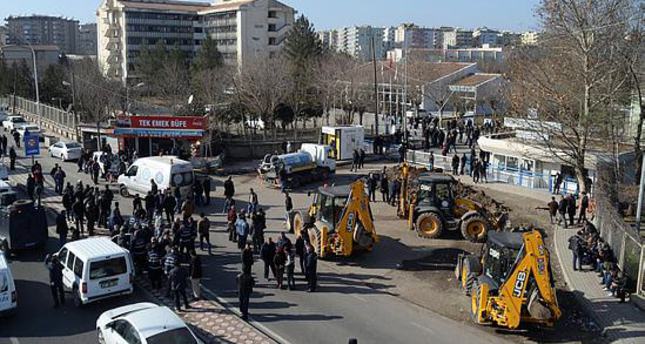 by Yusuf Ziya Durmuş Jan 22, 2015 12:00 am
The southeastern Turkish province of Diyarbakır is the scene of a confrontation between a private company supplying electricity to the province and a water company run by the municipality.

DEDAŞ cut off electricity to the wastewater treatment plant of the municipality earlier this week over unpaid bills, leading to a water cut to the city of 1.6 million people.

In return, the municipality sealed off the water supply to the residence of DEDAŞ's general manager, Murat Karagüzel, and began "excavation work" using bulldozers outside the electricity utility's offices, essentially blocking access to the building.

DEDAŞ declared that the municipality has a long overdue debt of approximately TL 90 million ($38.5 million). Karagüzel said the water treatment plants had their power back on, as the municipality supplied electricity illegally after the cutoff. He also said four buildings owned by the electric company had their water supply cut off, although they did not have any overdue water bills.

Gültan Kışanak, co-mayor of Diyarbakır from the opposition Peace and Democracy Party (BDP), branded DEDAŞ "reckless" for cutting off electricity to the water-processing plants. Speaking at a press conference yesterday, she claimed the municipality did not have owe DEDAŞ and that the company had illegally cut off electricity. "We always pay our debts in time, yet they still cut off electricity," she said, and added that they would not accept the "imaginary" bills sent by DEDAŞ. Kışanak also implied that the municipality will continue using electricity illegally "so that people will not be deprived of water." She also threatened to cut off water to all buildings opened and operated by DEDAŞ.

Southeastern Turkey has long been plagued by the use of illegal electricity. DEDAŞ, which won a privatization bid of the utility in 2013, has struggled to recover losses from unpaid bills and curb the illegal use of electricity.