Turkey opens its biggest ever camp for Syrian refugees 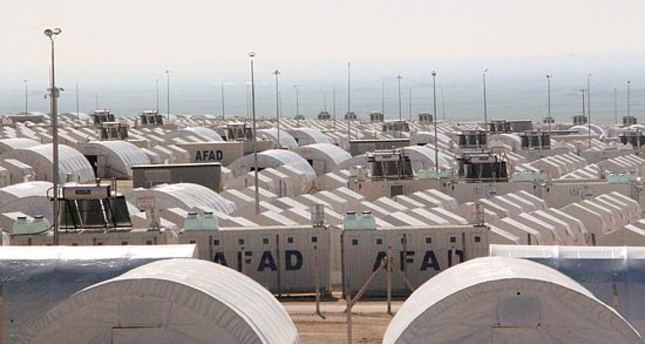 by Yusuf Ziya Durmuş Jan 25, 2015 12:00 am
Turkey's state-run Disaster and Emergency Management Authority (AFAD) opened the country's biggest-ever tent camp for refugees from Syria yesterday in Suruç, a town in the southeastern province of Şanlıurfa that was flooded with Syrian Kurds from the town of Kobani besieged by the Islamic State of Iraq and al-Sham (ISIS) last fall.

The camp will host 35,000 people, some 9,000 people more than another large camp in the provincial town of Akçakale. The sprawling facility is fitted with a school, hospital and 100 laundry and recreational areas. It also has its own water treatment facility that will supply water both to residents of the camp and agricultural lands surrounding the camp.

About 200,000 people had taken shelter in Şanlıurfa and Suruç, which is located on the opposite side of the border from Kobani, between September and December 2014. Suruç has a population of 101,000 people and in the face of the massive influx, the town's municipality along with municipalities of other towns in the area sought to set up camps for the refugees; however, they failed to respond to the high demand due to limited resources. AFAD's camp aims to relieve the local authorities of the heavy burden of the refugees and improve living conditions for Syrian Kurds who had to set up tents in parks and took refuge in abandoned buildings in the absence of proper accommodation.

AFAD plans to open another refugee camp for Syrians whose numbers are closing on 1.6 million in Turkey. The agency currently hosts 227,000 Syrians in 22 camps in the 10 provinces of southern and southeastern Turkey. These include six "container cities," which consists of shipping containers converted into housing units. Camps offer a wide range of services for displaced Syrians from grocery stores to clinics, banks, playgrounds for children and schools.

A camp with a 20,000-person capacity will be inaugurated in February in Derik, a town in the southeastern province of Mardin. Another camp was opened in Islahiye, a town in the province of Gaziantep earlier this year. Moreover, AFAD plans to increase the overall capacity of its camps to 300,000 people.

Turkey has spent some $5 billion on refugees since 2011, and is praised for its state-of-the-art camp facilities as well as its hospitality and humane treatment of them. However, authorities acknowledge that the growing number of Syrians and lack of a solution to the conflict in Syria is a heavier burden to the country than previously thought.

As the camps fall short of accommodating all refugees in Turkey, the government looks for ways to help Syrians fend for themselves. A biometric registration system was introduced last year to register all refugees for quicker delivery of humanitarian aid and to monitor them for criminal activities. The registration, which grants refugees a temporary status, enables Syrians to enroll their children in schools and benefit from free healthcare. The government also plans to issue temporary work permits for Syrians to decrease their economic dependence.