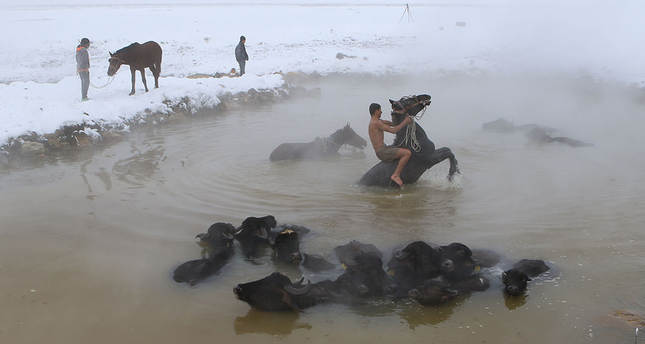 by Daily Sabah Jan 26, 2015 12:00 am
Turkey's eastern regions are in the clutches of an unforgiving cold spell. Temperatures hovering around minus 20 degrees Celsius make going out a challenge for thousands of people, especially in remote eastern parts of the country.

Few have a chance for a warm day out, then, like the residents of Budaklı, a village in the province of Bitlis. Budaklı is home to prominent thermal springs where water temperature reaches 40 degrees even in the coldest winter. It is a popular destination for tourists in the summer, but totally deserted in the winter. Instead, the springs host children, horses and cattles.

While adults are reluctant to take out the horses and the cattle for a wash after days of virtual lockdown in stables due to bad weather, children and teenagers alike take the reins and head to the pools surrounded with a snowy patch of land.

Nevertheless, weather in Bitlis may be counted as hot compared to other provinces in the region. While it was minus eight Celsius degrees in the province, temperatures dropped to their coldest at minus 21 degrees in Ardahan, Turkey's northeasternmost province. Snowfall accompanies the low temperatures all across the region. In some villages in the easternmost province of Ağrı, heavy snow almost buried single-storyhouses. The cold weather also caused waterfalls to freeze in the region.