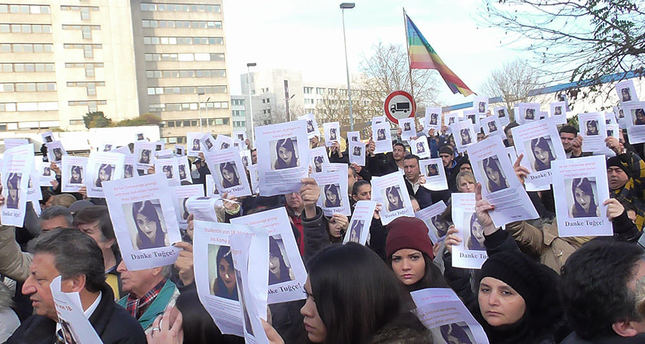 Lawyers of the Serbian teenager accused of killing Tuğçe Albayrak, a Turkish woman hailed as a hero in Germany for defending German girls being harassed, are seeking his release pending trial

The 18-year-old suspect in the murder of Tuğçe Albayrak, a German woman of Turkish origin who was applauded for standing up against the harassment of two German girls, is seeking release pending trial.

Sanel M., a German national of Serbian origin, confronted Albayrak, 23, outside a fast food restaurant in the German town of Offenbach on Nov. 15. Albayrak had earlier argued with M. and his friends inside the restaurant when the suspect and others harassed two girls. The young woman died of a blow to her head and the Serbian teenager was arrested on charges of causing her death, which is attributed to a fall on the ground after M. shoved her during the confrontation.

The teenager, currently in detention, will appear before an Offenbach court in February, but ahead of his trial, his lawyers appealed to the court for his release pending trial.

His request led to public uproar, although Sanel M.'s lawyer told German media he executed his right to plead to the court for his release. Judges will now debate whether the defendant should be granted release while prosecutors cited the possibility that he may flee the country if released. German media outlets reported that the prosecutors feared M. may leave for his motherland Serbia.

Tuğçe Albayrak had lapsed into a coma after she suffered a blow to her head. Her family had decided to switch off her life support on Nov. 28.

Sanel M. had confessed to carrying out the attack on Albayrak, but he told interrogators that he only swung "a slap" at the young woman.

M. has a criminal history ranging from battery to burglary. He was reportedly drunk at the time of the attack.

He faces charges for bodily harm with fatal consequences which carries a sentence up to 10 years. If charged with manslaughter or homicide, he would be incarcerated for a longer term. German legal experts have said he may get away with up to five years in prison if the court decides to reduce his sentence. The strongest evidence against Sanel M. remains a video footage recorded by security camera of the restaurant which shows the suspect attacking Albayrak. However, the blurred footage from the camera at a distant angle does not show the actions leading up to victim's fall to the ground. Experts say defense lawyers may argue that Sanel M. acted in self-defense and even claim Albayrak attacked the defendant if eyewitnesses do not come forward, and if a more tangible evidence cannot be found.