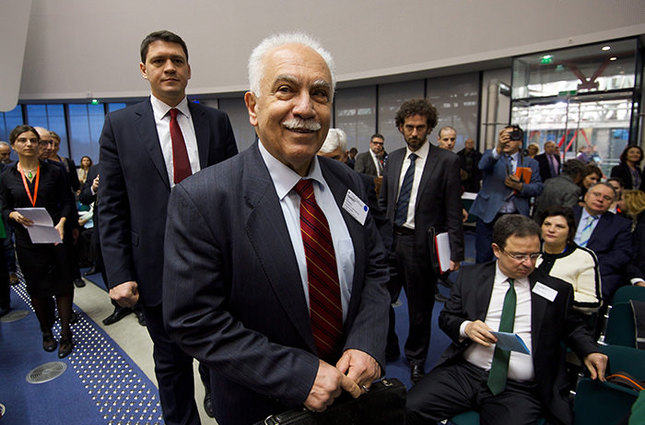 by Jan 28, 2015 12:00 am
Turkish politician Doğu Perinçek confronted a defense team for Armenia at a hearing at the European Court of Human Rights yesterday in France over his denial of the Armenian genocide. The hearing failed to produce a verdict on whether Perinçek's denial constituted freedom of expression

The highly anticipated appeal hearing of Switzerland and Armenia's case versus Turkish opposition politician Doğu Perinçek was held in Strasbourg, France on Wednesday

Perinçek was convicted by a court in Switzerland, where denying the Armenian genocide is criminalized, for his remarks branding the genocide "an international lie" in that country. He argued that the denial was in line with his freedom of speech and took the case to the European Court of Human Rights (ECtHR). The court had ruled in his favor in 2013, but Switzerland appealed the verdict. Armenia had requested to join the lawsuit as co-plaintiff. The country was represented by a defense team that includes lawyer Amal Alamuddin Clooney, better known as the wife of Hollywood superstar George Clooney.

After hearing the sides, the Grand Chamber of the ECtHR adjourned the trial to announce its verdict at an unspecified date in the near future.

Clooney said at the hearing that the lower chamber of the ECtHR had not taken documents from 1915 into account when it issued the ruling in favor of Perinçek. She claimed the previous ruling "cast doubt on the reality of genocide." In the ruling she was referring to the European court's judges upholding Perinçek's right to question the genocide, as it was a matter of public interest and did not comment on the reality of the genocide.

She said that the Ottoman Empire, which signed the Sevres Treaty in 1920 with the Allied powers, had promised to bring the perpetrators of the killings of Armenians to justice. Mrs. Clooney further went on to say that Talat Paşa, a senior Ottoman official in World War I, had admitted to the genocide, citing a New York Times article from that period that says Talat Paşa, a member of a powerful triumvirate governing the Ottoman Empire during the war, decided to expel the Christian community from Turkish territories.

Perinçek countered her claim and said Talat Paşa was not convicted and neither was he subject to any trial. He went on to say that Britain had launched an inquiry into allegations of genocide and closed the case on genocide due to a lack of any tangible evidence.

He said, on the contrary, Talat Paşa worked with the Armenians in the 1908 revolution against the Ottoman sultanate. He cited a book written by Armenia's first prime minister, Ovanes Katchaznouni, who spoke about a conversation with Talat Paşa and said Paşa told him they wanted to resolve any problems between Turks and Armenians in a peaceful way.

In the events that led to the present case, Perinçek, at various conferences in Switzerland in 2005, rejected allegations that the events of 1915 and the following years in the Ottoman Empire amounted to "genocide" of the Armenian people.

The Switzerland-Armenia Association filed a criminal complaint against him. Perinçek was tried by the Lausanne Police Court in March 2007. He was found guilty of racial discrimination and fined.

Many Armenians argue that denying allegations that the events of 1915 constituted "genocide" should be a crime, just as negating the Holocaust is. In 2003, the National Council of Switzerland, the country's parliament, recognized the events of 1915 as "genocide."

Turkey officially refutes this description, saying that although Armenians died during relocations many Turks also lost their lives in attacks by Armenian gangs.

A Swiss Appeals Court subsequently confirmed Perinçek's sentence. Perinçek then appealed to the Federal Tribunal, the highest court in Switzerland, which also confirmed the sentence.

In 2008, Perinçek appealed to the ECtHR in Strasbourg, claiming that the Swiss courts had violated his rights, including that to freedom of expression. He demanded compensation of 140,000 euros for moral and financial damages, as well as court expenses.

Separately, Turkey has called for a joint Armenian-Turkish research project into the events, making use of the archives in both countries, to establish the facts.

In April 2014, President Recep Tayyip Erdoğan, who was prime minister at the time, offered condolences for the Armenian deaths that occurred in 1915 - a first for a Turkish leader. The move was seen as a significant step toward a possible reconciliation.
Last Update: Jan 28, 2015 5:48 pm
RELATED TOPICS