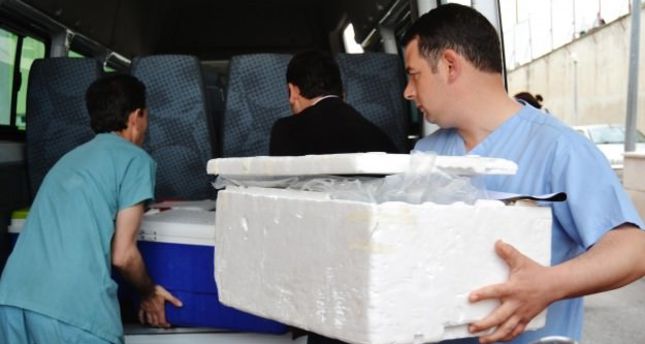 by Daily Sabah Jan 29, 2015 12:00 am
Yesterday, Turkey's Presidency of Religious Affairs (DİB) launched a new campaign for imams to raise awareness about organ donation, while DİB head Mehmet Görmez urged imams to donate their organs first before advising the congregation to do so.

DİB, the top religious authority in the country, quashed a religious debate on whether donating organs is permissible in Islam by introducing a new campaign to raise public awareness about organ donation.

Görmez and Minister of Health Mehmet Müezzinoğlu attended a meeting in order to inform religious figures on the matter in the Turkish capital Ankara.

Görmez called upon imams, muftis and other members of the religious authority "to practice what they preached" and donate their own organs. "Sometimes, clerics fail to act in line with advice they dispense to their congregation. On this issue, we should lead the people. I call on my colleagues to tell their congregation in the sermons that they have donated their organs," Görmez said. "This will make people attending mosques heed your advice," he added.

"It is the greatest alms one can deliver from the heart," he said. Görmez said he found it odd that organ donation has been the subject of contention for decades among clerics. "Life, value of a human being's life are at the center of all religions," Görmez said. He quoted a verse from the Quran that says that killing someone is equal to killing humanity and giving life to another is equal to giving life to humanity.

Görmez said religion should not be viewed as an obstacle to organ donation: "Of course, people may set conditions, but they should eventually consent to it."

Apart from encouraging people to donate their organs in sermons and conversations with congregation members at mosques, DİB will release publications on the issue.

Müezzinoğlu said at the meeting that people do not know enough about organ donation procedures, and even those informed about donation do not prefer to donate "due to lack of sensitivity [for others' lives]." Müezzinoğlu said they will work with headmen – the administrators of neighborhoods and villages – and school principals in the next stage of the campaign to raise awareness on the issue, and to reach out to more people.

He said the low rate of posthumous donations posed a major problem for people seeking organ transplants. "You do not need your organs when you are dead, but there are people who dream of a new life after getting organ transplants. Helping people in need is one of the main features of our society," he said. The minister said he believed DİB's imams will be a great contribution to awareness campaign.