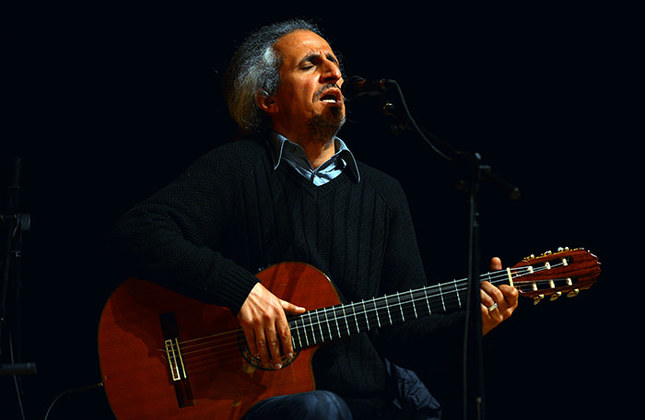 The 39-year-old singer and songwriter performed for the first time in Turkey on January 29 and spoke to The Anadolu Agency just before his Istanbul gig Friday.

Namjoo said his style of mixing traditional and modern music has been met with criticism in Iran "because they are conservative."

"They are scared of changing the tradition, but the tradition has to be changed," said Namjoo who has lived in the U.S. since 2008 and cannot go back to Iran where he is wanted for allegedly insulting the Islamic government through his works.

The singer admits missing his family and friends back home, but saysbthat has not stop him from enjoying his new life.

"I am doing good in New York and it is my home now," Namjoo said. "I don't feel like I am in exile."

"Iran right now has nothing to be missed," he added.

Known for blending classical Iranian music with jazz and rock, Namjoo does not believe his fame came from his lyrics, because they are in Persian.

"We don't understand each other," he said. "I think it is about the magic of the music."

Namjoo said the musical scale belongs to all nations, including Greeks, Armenians, Afghans and Indians.

Namjoo plays the "setar" - a traditional Iranian lute - and said he was amazed by the atmosphere at his Ankara concert.

"There were maybe 100 Iranians," he said. "(The audience) was mostly from Turkey."

Namjoo began his musical training at the age of 12 and later studied theater and music at Tehran University.

Known by the Turkish audience for his songs "Nobahari" and "Ey Sareban," his latest album "Trust the Tangerine Peel" was released in May 2014.
Last Update: Feb 01, 2015 10:47 am
RELATED TOPICS