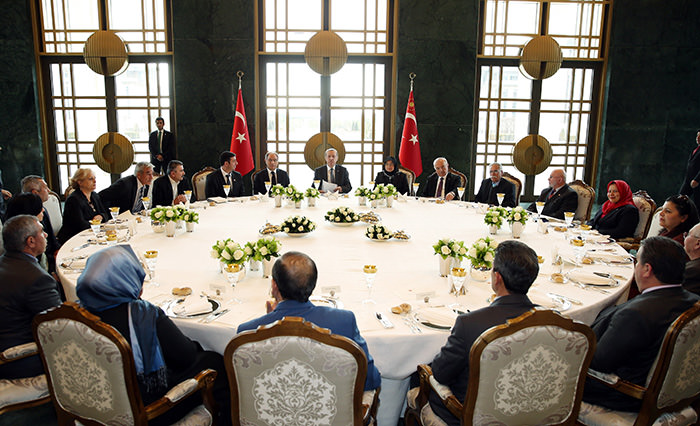 by Anadolu Agency
Feb 24, 2015 12:00 am
Turkish President Recep Tayyip Erdoğan has described "muhtars" (local headman)-Turkey's locally elected heads of villages and city neighborhoods - as the "first step for representation of the national will."

In an address to hundreds of such local leaders at the presidential palace in Ankara last week, Erdogan said they had a critical role in maintaining relations between various local authorities and addressing the needs of the people.

There are more than 50,000 mukhtars - only 600 are women - across Turkey. They are locally elected and receive only a small allowance for their services. The Ottoman Empire established the system for rural areas in the 1830s; the Turkish Republic kept the network and expanded it to the country's cities in 1944, says Ramazan Özunal, chairman of the Muhtars' Union.

"Originally, the system was established so that those local leaders could act between the state and people, much like a modern-day ombudsman," Özunal said.

Muhtars still preserve the DNA of ombudsmen in today's Turkey even if interaction between locals and muhtars has become more limited.

A group of volunteers in Istanbul are now working on a web-based program, called "Muhit"- meaning 'neighborhood' - to repair this fraying link.

"We aim to establish a 'notification network' between locals and authorities by using muhtars' role in neighborhoods," says Sera Tolgay, a 23-year-old member of the development group.

Muhtars have various roles to play and are often tasked with compulsory duties for public health, education and military matters. They often address the demands of local residents but, as Tolgay notes, these elected people lack effective means to interact with their electoral base.

Not all muhtars think there is a problem. "If anyone needs any assistance, they can reach me by telephone or come into my office," says Nejdet Baykan, a 52-year-old muhtar in Istanbul's Zeytinburnu district.

In addition, local municipalities have established mechanisms to address daily problems encountered by locals in the city.

Although a person can direct his or her problem by calling the authorities or filling out a form on a municipality website this takes too much time, according to Tolgay.

Moreover, many locals are generally unaware of common problems in their small district and are unable to meet together to raise issues with the local authorities. "Many people do not spare the time to go to muhtars to file a petition for specific problems. This program will ease that process," Tolgay says.

The Muhit program allows users to relate their problems to mukhtars and even organize a small campaign for a particular problem, such as buildings parks. Tolgay describes the necessity of the program as enabling mukhtars to "prioritize those problems and raise those issues to higher authorities."

There will be both a web-based service and mobile application, Tolgay claims, adding that the interface will be user-friendly, meaning that locals or mukhtars will not find it difficult to operate.


Some muhtars are uneasy about such services, believing that such programs will require extra spending.

Muhtars do not receive a salary and pocket only a modest $350 monthly allowance, forcing many to have a regular job. Their revenues have shrunk in recent years due to the state's decision to provide documents - such as residence permits - through online services.

Nejdet Baykan does not find the Muhit idea appealing, believing that it will cost more money.

Nevertheless, Tolgay claims that some of the local authorities and leaders that her group is in touch with view the service positively.

The group expects coding to finish next month. Following that, they will put the service in use in May or June across a limited area to detect possible glitches. Sponsored by the Community Volunteers' Foundation, a well-known non-governmental organization in Turkey, Tolgay says the project is not inventing anything new, just digitalizing an established system.

Erdoğan, in last week's address, praised the role of muhtars in "unifying the country around common goals and objectives."


To do that, local leaders should be aware of problems in their areas in order to address them effectively.

This web-based program may be the first step in taking a tradition with its roots in the Ottoman period into the digital age.
Last Update: Feb 24, 2015 12:58 pm