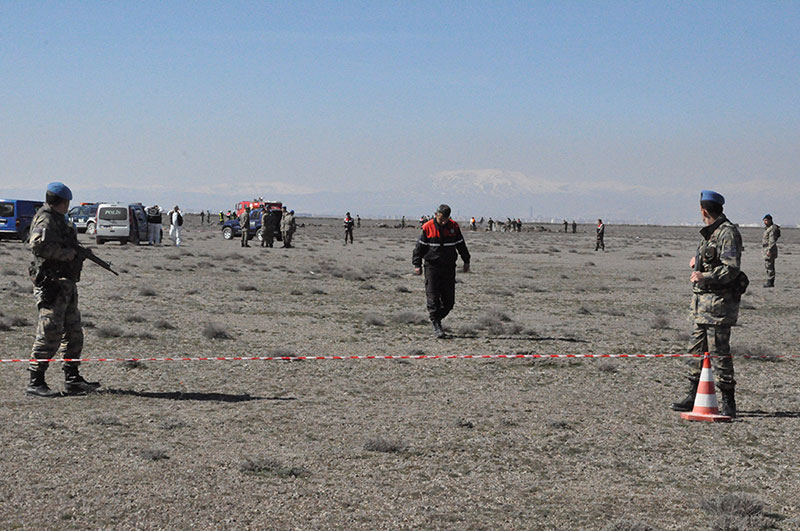 by Daily Sabah Mar 05, 2015 12:00 am
Two Turkish Air Forces pilots were killed when their F-4 fighter jet crashed on Thursday morning in the central Turkish province of Konya, some 720 kilometers west of Malatya where two F-4s crashed on Feb. 24, killing four pilots.

Capt. Mustafa Delikanlı and Capt. Mustafa Tanış, two veteran pilots, took off from an air base in Konya's neighboring Eskişehir on Thursday morning. One hour later, the aircraft crashed near a site where Turkish and Azerbaijani air force pilots were involved in a joint military exercise, but the Turkish army announced that the pilots were not part of the exercise but rather on a routine training flight involving dodging surface-to-air missiles.

The body of one of the pilots was found while search teams are combing the vast, sparsely populated area to find the other body.

The crash raises concerns of the safety of F-4 jets, which were modernized in recent years and were scheduled to be decommissioned over the next decade.

The cause of the crash is not known, and the Turkish Armed Forces expressed "disappointment" over media reports tying the crash to the airworthiness of the planes.

On Feb. 24, four pilots were killed in the eastern province of Malatya when two F-4s crashed, although it was a different model than the one in Konya that crashed during another training flight.

F-4 jets have been in use by the Turkish Air Force since 1980 for reconnaissance and training missions. Eleven RF4-Es have crashed between 1995 and 2015. A total of 10 officers were killed in those accidents, which were all mid-air collisions and crashes.

Speaking to Anadolu Agency, Defense Minister İsmet Yılmaz said the latest crash "eroded public confidence" in F-4 jets. "We now have to think twice before employing these aircraft. Our commanders will do what is necessary," he said, without elaborating.
The crash also raised concerns on skilled manpower in Air Forces, with six pilots killed in less than two weeks.
Last year, following the approval of a new law extending compulsory service for Air Force pilots, 74 pilots resigned.

The new military law approved by Parliament increased compulsory military service for pilots from 13 to 16 years. It was later decreased to 15 years through an amendment.

Under the new law, military officers trained to be pilots in the Turkish Air Force cannot resign before completing 15 years of compulsory service.

According to the Ministry of Defense, more than 100 pilots resigned from the Turkish Air Force in one month in 2013. Although the reasons for the resignations are not given, many resign before their retirement for lucrative jobs in the private sector. The Turkish Armed Force had earlier denied reports in several media outlets that the resignations weakened the capacity of the military, as the training of pilots is a costly and lengthy process. Still, concerns remain of a possible shortage of experienced pilots in the country, which shares a lengthy border with Syria where a civil war and the Islamic State of Iraq and al-Sham (ISIS) threat lingers. Along with a strong land force, Turkey relies on fighter jets to protect its border.