Women-only street market in Turkey, men can enter only as shoppers 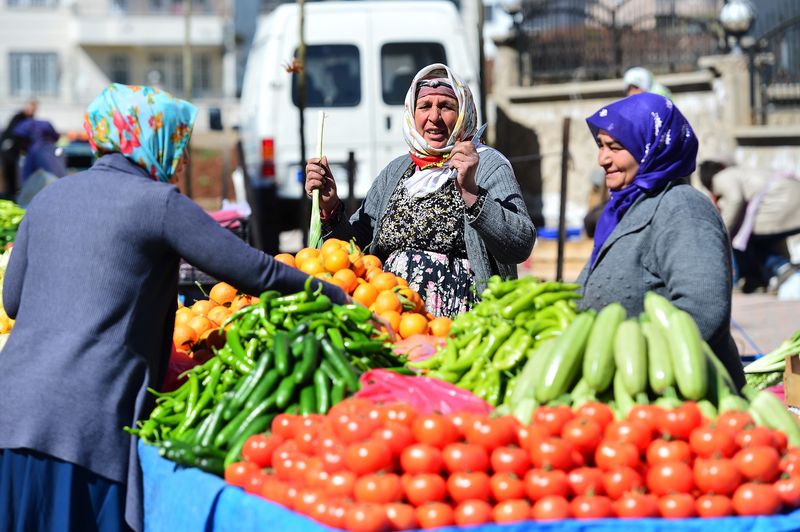 by Mehmet Çelik Mar 07, 2015 12:00 am
A street market project, called 'Jiyan Semt Pazarı' – 'resistance' or 'living' street market in English – has been initiated by Bağlar Municipality in Turkey's southeastern province, Diyarbakır. which allows only women entrepreneurs, 18-year old or older, who have experienced domestic violence in their households, divorced, have their husbands in prison or women struggling to make ends meet.

The market, which men can only enter as buyers, has been set up for selling fruits and vegetables, as well as other groceries, but women entrepreneurs also market their hand-made art crafts for the shoppers.

The initiative, which currently employs 184 women entrepreneurs, has been set up to give women, who are facing difficulties in making ends meet or experience domestic violence, financial support and rebuild their self-confidence.

"This is a project which aims to create awareness about women and women's difference. Women live through all kinds of financial difficulties. Our aim is to integrate women victims of violence and 'otherness' into economic life," has said, the market's coordinator, Saniye Bozkurt, according to Anadolu Agency report.

The market's women entrepreneurs has commented that they participate in the project to contribute to their households in economic terms.

Women in Turkey are less likely to participate in the labour market according to figures by Turkish Statistical Institute,TurkStat, and Organisation for Economic Co-operation and Development (OECD) reports.

According to OECD's country report on Turkey, some 69% of men are in paid work, while this figure is only 29% for women. Similarly, TurkStat's recent report indicates that Among the population aged 15 and above, only 27.1 for women participate in the labour market, worst figure among European Union member countries with a 39.9 percent female employment rate.
Last Update: Mar 08, 2015 11:09 am
RELATED TOPICS