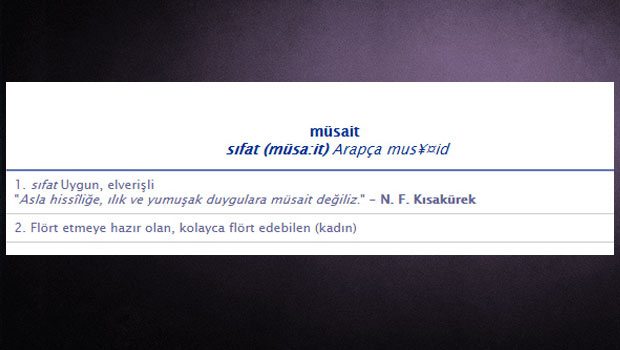 by Daily Sabah Mar 10, 2015 12:00 am
The Turkish Language Association's (TDK) definition of 'available' in its official dictionary has been criticized by women all around Turkey for suggesting that it means 'One who is ready to flirt, who can flirt easily (woman).'

Many women who have reacted to the sexist statement on social media have demanded that it be removed as soon as possible.

A feminist group, called 'Istanbul Feminist Kolektif', asked on their facebook account: "Why is it 'woman' written in parenthesis? Can men not also be 'available'?"

There is now a campaign on the leading social platform Campaign.org for the definition of 'available' on TDK's dictionary be revised. The campaign says that flirting is an act done mutually, and that both women and men can possess the nature of flirting easily. The campaign's statement said further: "The Turkish Language Association displays a sexist attitude with the parenthesis including the word of woman, and serves patriarchy that constitutes the basis of violence and discrimination against woman."

TDK's definition is also prevalent in its printed dictionary.

He said, "Everyone can warn [us], and we would correct it [definition]."