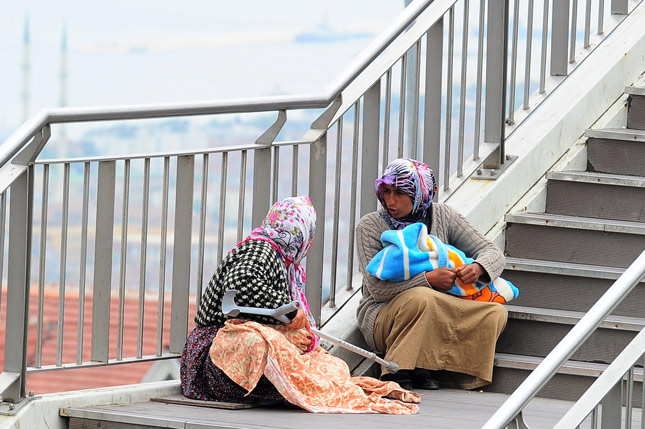 Beggars, a common sight on the streets of Istanbul and other big cities, are up to a new trick as a police raid has revealed: speaking Arabic and posing as Syrians to exploit sympathy for the hundreds of thousands of impoverished refugees.

Istanbul Metropolitan Municipality police went out to round up Syrians sleeping on the boardwalks and makeshift tents to send them to refugee camps in border cities, when they came across an unusual phenomenon. Initially thought to be Syrians as they spoke Arabic and Kurdish, beggars turned out to be citizens of the very country in which they begged. As municipal police pressed further, men, women and children had to switch to their native language and produce Turkish IDs. Many turned out to be from Gaziantep, Hatay and Şanlıurfa, provinces in southeastern Turkey that border Syria and have a sizeable Turkish Arab community.

The beggars posing as Syrians got away with paying fines, as the Turkish Misdemeanors Act does not have a tougher sentence for panhandlers. They were back on the streets in no time, but they will likely avoid imitating Syrians for a while.

Turkey is home to some 1.8 million displaced Syrians and about 250,000 of them reside in 25 camps located in border cities.

Istanbul, a hub of migrants from all across the globe, is perhaps the most popular destination for Syrians looking to make a living. Well-off families buy or rent houses in the city of 14.3 million people, while the less fortunate set up tents in the parks and sometimes, on the wide sidewalks in downtown Istanbul, or take shelter in abandoned buildings with no electricity or water. Despite the work of state-run and private charities to address their needs such as accommodation and a steady income, the sheer number of Syrians and lack of aid from the international community poses a challenge for Turkey.

Although most turned out to be Turkish nationals, Fatih, Eminönü, Aksaray, Taksim and Üsküdar, the city's busiest districts, are still swarming with Syrian beggars, especially women with children in tow. Scrawling a call for help in Turkish on a piece of paper and flashing their Syrian passport, they seek to elicit money from passersby, or hound motorists stopping at red lights. Authorities say beggars only make up a small portion of the refugee population, while other refugees say they feel ashamed of fellow Syrians turning to begging instead of seeking state aid to be accommodated in camps. Authorities occasionally round up Syrian beggars and send them to the camps, but some Syrians are refusing to stay in the camps, often leaving their accommodation in pursuit of a better life.

No recent official figures are available, but 2014 figures show Istanbul houses more Syrians than any other city, with 330,000 displaced people from its southern neighbor.

Turkey has spent some $5 billion on refugees since 2011, and is praised for its state-of-the-art camp facilities as well as its hospitality and humane treatment of the refugees. However, authorities acknowledge that the growing number of Syrians and lack of a solution to the conflict in Syria is a heavier burden to the country than previously thought. As the camps fall short of accommodating all refugees in Turkey, the government looks for ways to help Syrians fend for themselves. A biometric registration system was introduced last year to register all refugees for quicker delivery of humanitarian aid and to monitor them for criminal activities. The registration, which grants refugees a temporary status, enables Syrians to enroll their children in schools and benefit from free health care. The government also plans to issue temporary work permits for Syrians to decrease their economic dependence.