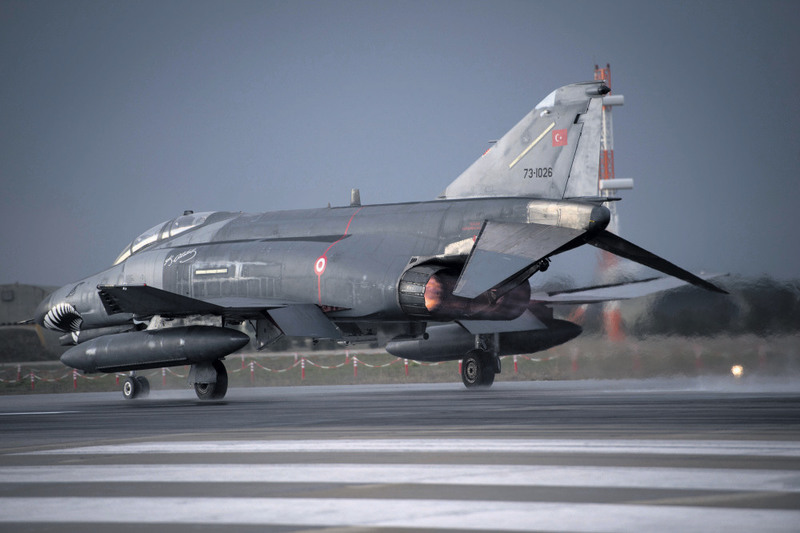 F-4 jets, a reliable aircraft that made a name for itself in the Vietnam War, were obtained from Germany and the United States in a bid to boost Turkey's air power.
by Daily Sabah Mar 11, 2015 12:00 am

The army has announced the suspension of flights of a type of F-4 fighter jet starting today, following two deadly crashes in the past 6 weeks that sparked concerns over the decades-old aircraft's safety

The Turkish military has decided to decommission all RF-4Es, a version of the F-4 fighter jet, after three F-4 class aircraft crashed in two separate incidents in central and southeastern Turkey within the past two months, killing six air force officers.

General Abidin Ünal, commander of the Turkish Air Force's Combatant Air Force Command, announced yesterday that the aircraft, which are mainly used in reconnaissance and training flights, will be decommissioned after "one last flight" by himself and Air Force Commander General Akın Öztürk today.

Speaking at the command base in western Turkey's Eskişehir, where an F-4E took off before crashing in Konya province on March 5 killing two officers aboard, Ünal said that two RF-4E aircraft had killed four military officers when they crashed in Malatya on February 24. "We mourn the victims in these subsequent crashes. These crashes brought the aircraft into the spotlight. Everyone interpreted the crashes differently and we have seen comments misleading the public and ignoring the grief of the victims' families and colleagues," he said, noting that the investigation into the crashes was still underway and it would not be concluded in a short time.

Mentioning comments that defined the aircraft as "junk" and "old" and pilots as insufficiently trained, Ünal said the jets were eligible for flight until the end of 2015. He said that RF-4E aircraft were designed for reconnaissance missions exclusively and elaborated on their modernization. He said they were planning to "retire" them and replace them with F-16 jets gradually, but as F-16s completed the test flights successfully as of Tuesday, they decided to speed up the process. "We will have a decommissioning ceremony yesterday and I will fly an RF-4E [on Thursday] with our Air Force Commander," he said.

Ünal also spoke about the initial findings in the Malatya crashes and said a "human and communications error" might have caused them, noting that the pilots were flying below the altitude required to be kept steady in the area when they crashed into a hill.

In the Konya crash, Ünal said the pilots pressed the button that would eject them to safety "one second late" and denied media reports that the pilots were inexperienced.

The aircraft involving two crashes in Malatya were RF-4E planes that were first employed by Turkey in the 1980s while the one that crashed in Konya was an F-4E 2020, which will be in use until its eponymous year. The crash in Konya was attributed to "pilot error," according to Minister of National Defense İsmet Yılmaz. Yılmaz said earlier that F-4 jets will be in use until their expiration date five years later after a joint decision by the army and the government. Yılmaz has said past accidents involving the aircraft were primarily due to pilot error and defended their continued use, citing that Egypt, South Korea and Greece also used the fighter jets.

Currently, Turkey has eight RF-4E jets and 47 F-4E 2020. F-4 jets have been in use by the Turkish Air Force since 1980 for reconnaissance and training missions. Eleven RF4-Es have crashed between 1995 and 2015. A total of 10 officers were killed in those accidents, which were all mid-air collisions and crashes.

Abidin Ünal also spoke about concerns related to a shortage of veteran pilots after casualties. He said 374 pilots quit the Air Force between 2010 and 2015 but the number of pilots, which was 1,280 before the resignations, rose to 1,300 in 2015. He said resignations did not impact the training of pilots. Ünal attributed the resignations to better pay in the private sector, frequent reassignment of pilots and obligation to serve 30 years for retirement eligibility.
Last Update: Mar 12, 2015 10:11 am
RELATED TOPICS