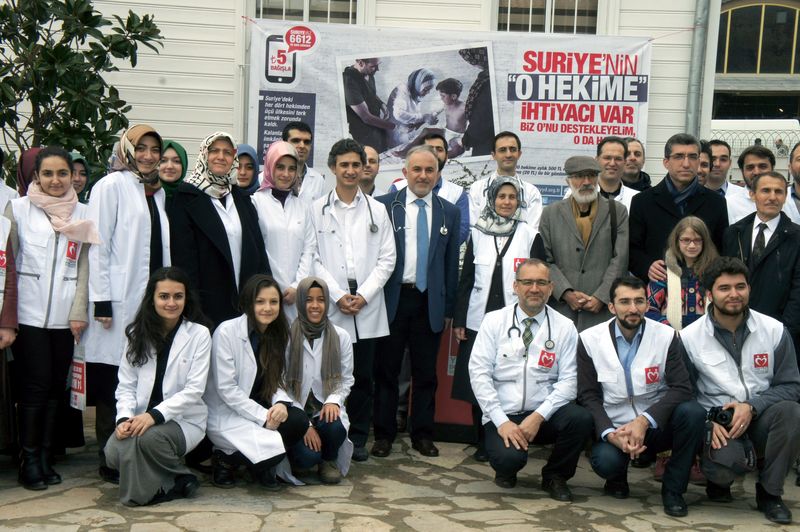 by Anadolu Agency
Mar 14, 2015 12:00 am
A number of Turkish doctors, who are members of the Istanbul branch of Doctors Worldwide, donated their wages to Syrian doctors working under conflict conditions on Saturday.

"On the occasion of 14th March, Doctors' Day, we've gathered here to share our wages with Syrian doctors, who continue working there voluntarily, without getting any money," Kerem Kinik, board chairman of the Istanbul-branch of Doctors Worldwide, told press members in Istanbul.

The conflict in Syria started in March 2011 when President Bashar al-Assad's regime responded to anti-government protests with a violent crackdown. It has created an acute refugee crisis, with as many as 3.8 million Syrian refugees registered in neighboring countries Turkey, Jordan, Lebanon and Iraq.

Only around 5,000 out of 36,000 doctors have remained in Syria after the conflict, according to Doctors Worldwide.

"Syria needs that doctor" is the name of the campaign which aims to collect 6 million Turkish liras (around $2.2 million) in order to meet the wages of 1,000 Syrian doctors for one year.

"We would like to collect this money as soon as possible and give it to them directly by going to the hospitals that they work in," Kinik said. He stated that the donations were an opportunity for them "to give them monetary support and announce their heroism to the world."
Last Update: Mar 15, 2015 10:23 am