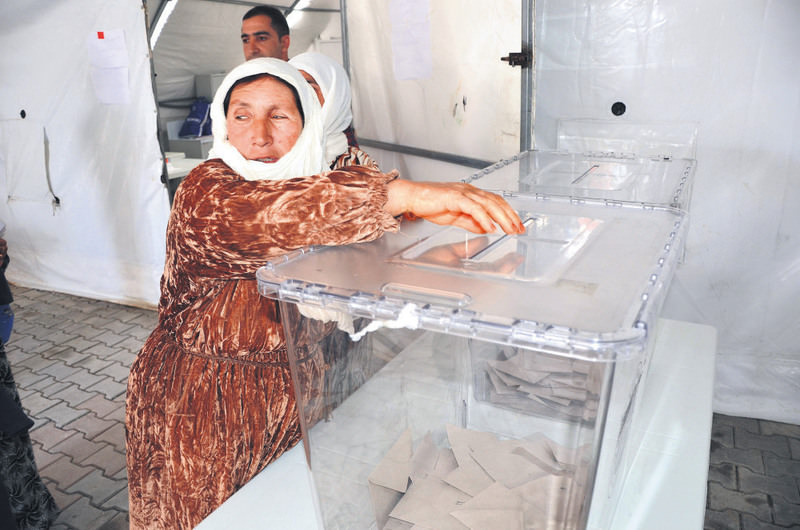 by Daily Sabah with IHA Mar 17, 2015 12:00 am
While their country lies in ruins after a brutal crackdown on pro-democracy groups escalated into a civil war, Syrians who took shelter in neighboring Turkey got a taste of democracy in free elections on Monday. Camp leaders or mukhtars, the Turkish title for elected heads of villages and neighborhoods, at a refugee camp, populated by 9,318 people, were elected by refugees.

Suruç Accommodation Facility, as the Turkish government calls the state-of-art refugee camps built for Syrians, is located in Suruç, a town in the southeastern province of Şanlıurfa situated right across from Kobani, a Syrian Kurdish town. The camp, the largest of its kind in the country, houses Kobani locals who fled en masse into Turkey after the Islamic State of Iraq and al-Sham (ISIS) launched an offensive on the semi-autonomous town last year.

Long deprived of free and fair elections under four decades of the Assad family rule, during which only candidates sanctioned by the regime ran for office, Syrians were excited to have the opportunity to choose between 21 candidates, including five female candidates.

Abdul Vahap Abdurrahman, a professor who had to leave his country after the war broke out, was among the primary winners of the elections as he garnered 1,537 votes in First Neighborhood, one of the numerically-titled 15 neighborhoods in the camp that has a capacity of 35,000 people.

In a move of affirmative action, one female council member was appointed in each neighborhood council in the camp.

Abdullah Çiftçi, district governor of Suruç, said it was "a first" for many in the camp to be able to vote without any pressure to vote for one particular candidate.

Sara Muhammad, a woman voting in the elections thanked Turkey for helping them experience a free election.

Although camp mukhtars do not have powers like elected officials back home or the Turkish mukhtars, they will be responsible for representing their neighborhoods, conveying their collective demands to Turkish authorities and organizing events.
Last Update: Mar 18, 2015 1:50 am
RELATED TOPICS