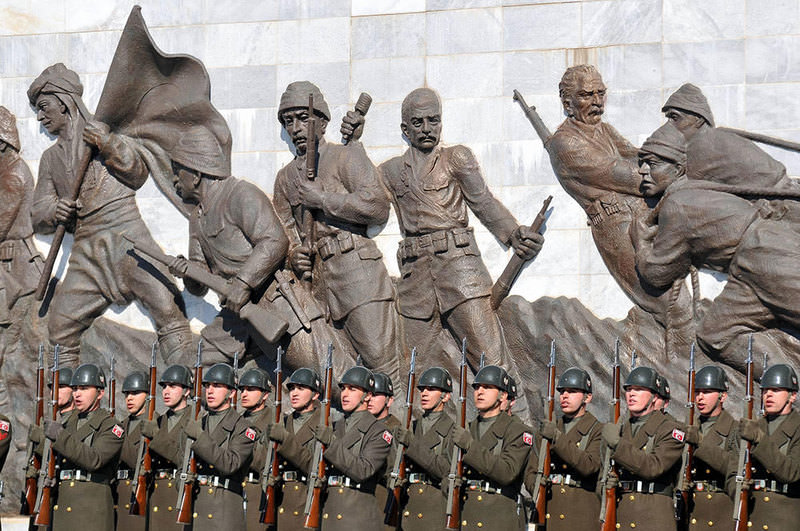 On Wednesday, Turkey marked the 100th anniversary of the Gallipoli naval battle of World War I, which saw an unprecedented victory against the Allied forces, with ceremonies across the country

The Ottoman victory at Gallipoli over the Allies 100 years ago was remembered in solemn ceremonies across Turkey where the fallen soldiers are remembered.

Çanakkale in northwestern Turkey, where the battle took place, was the central point of the ceremonies remembering the 1915 battle.

Prime Minister Ahmet Davutoğlu, ministers and commanders of the Turkish Armed Forces and other dignitaries attended the major ceremony in Çanakkale on the occasion of the Çanakkale Victory and Martyrs Day.

Giving a speech there, Davutoğlu said the fallen fighters of Gallipoli had left a legacy of brotherhood for generations to come, referring to volunteers from every ethnicity and every city who flocked to the front.

"This nation, which fought heroically in Asia, Africa, Europe, Middle East and the Caucasus from the 1911 battle in Tripoli to the 1922 War of Independence, faced a great challenge in Çanakkale. It had two options: Either lose and have its dignity trampled on or overcome it. The nation's fate changed in Çanakkale, and the seeds of the Republic of Turkey were sown here under the leadership of Mustafa Kemal Atatürk," he said, referring to the founder of the republic who served as a commander in Gallipoli. "May God bless them; their legacy will be preserved," Davutoğlu added.

The prime minister noted that the battle shaped Turkey's future by setting an example of solidarity among people from all around the empire.

"We will not betray their legacy and will not allow those aiming to divide this nation. The grandchildren of soldiers, be they Turks, Kurds, Alevis or Sunnis, will march to the future together," he said. Davutoğlu also mentioned the soldiers who came from former Ottoman territories in the Middle East, the Balkans, Asia and North Africa to fight for the Ottoman army. "The memory of those who fought and died lives all across these regions," Davutoğlu said, pointing out that members of the Iraqi tribe whose ancestors fought alongside Turks in the battle were among the guests attending yesterday's ceremonies. "Turkey reaches out to the grandchildren of those fallen soldiers, and we share a common destiny with them," Davutoğlu said.

The prime minister said "oppressed people" around the world that contributed to the Ottoman Empire's Gallipoli campaign knew that their fate depended on the outcome of the battle. "If Çanakkale fell, they too would fall; however, their fate changed by the victory that demonstrated that no army is invincible," he said.

Referring to Turkey's expanding and active role in helping "the oppressed," Davutoğlu said, "As long as we breathe, cruelty in the world will not be able to sleep peacefully. We embraced our Syrian, Kosovar and Iraqi brothers, and these lands will remain home to those seeking sympathy. Today, the Republic of Turkey is strong. We have a country not dependent on others for aid. And by God's will, Turkey will be known as a country embracing all oppressed nations and as a country among the world's largest 10 economies during the centenary of the republic," he said.

The prime minister reminded of the recent projects for a national defense industry independent of other countries and boasted that a new radar and electronic warfare technologies center opened on Monday will end Turkey's "dependence for defense needs." "Our army will not have foreign-made aircraft, warships or tanks. They will be domestically-made, like the Altay tank, like the Anka drone," he said, referring to ongoing projects.

"The Ottoman Empire did not have a domestic defense industry and it was crushed under debt to other countries. Now, we have a new Turkey that paid all debts to the International Monetary Fund, a new state standing with dignity," he said.

The first ceremony was held at the Atatürk Monument in central Çanakkale with officials laying wreaths at the monument dedicated to the founder of the Republic of Turkey, which was followed by a parade of troops. The next ceremony was held at Gallipoli Peninsula, the site of a monument for fallen soldiers. It included a wreath-laying ceremony, a moment of silence in memory of the soldiers, a 21-gun salute and a recitation of the national anthem. Turkish troops marched in a parade during the commemoration as well, while the Air Force performed aerial stunts. Participants in the ceremonies then visited the cemetery where soldiers killed in the battle are buried and recited prayers in memory of the soldiers.

All across the country, prayers were recited in mosques in memory of the fallen. Mosque congregations were also served soup and dried raisin compote after prayers in remembrance of rations distributed to troops and sailors that survived on paltry rations.

The battle that fuelled patriotic fervor is etched in the memories of Turks as a decisive victory, one that inspired a subsequent struggle for independence and the eventual foundation of the Republic of Turkey.

The Ottoman Empire, which sided with Germany and Austria-Hungary in World War I, faced a major push from Allied forces seeking to control the Çanakkale (Dardanelles) Strait, the gateway to Istanbul, the then-capital of the Ottoman Empire, and the Black Sea from the Aegean and Mediterranean seas. In February 1915, the British and French navies launched a massive attack on the straits, and on March 18, 1915, the primary assault began. When battleships failed to seize the strait, the Allies dispatched troops that landed on the Gallipoli Peninsula in April 1915. This campaign failed as well, with heavy casualties sustained on both sides. The Allies' total casualties amounted to 46,000 soldiers, while Ottoman forces' casualties were 65,000 troops in the battle, according to Turkish sources, though the exact number of casualties is still unknown.

The country will host international commemoration events next month to mark the Allied troops' landing on the Gallipoli Peninsula. High-ranking officials from around the world and the Allied countries have been invited to the events. Prince Charles and Prince Harry will be among the guests at the events.