Explosion kills one at magazine office of 'Adımlar' in Istanbul 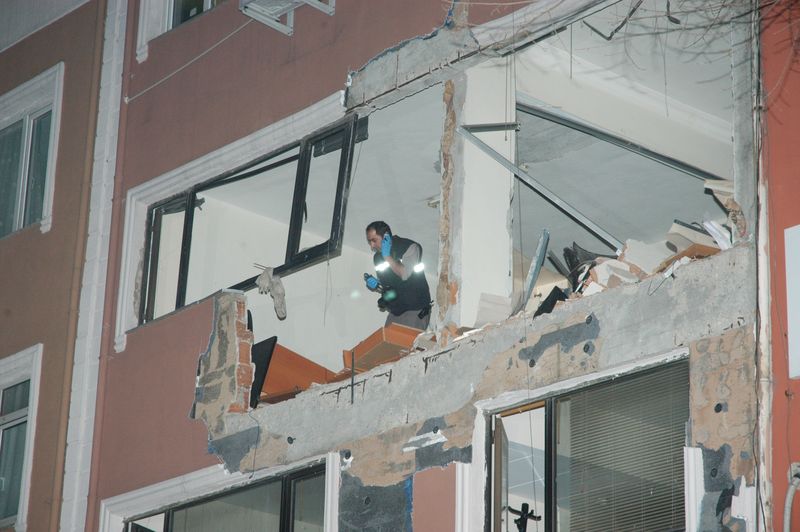 by Daily Sabah Mar 25, 2015 12:00 am
A writer was killed and three others were injured when a bomb exploded in the offices of Adımlar (Steps), a magazine linked to a militant group, in Istanbul on Wednesday evening.

A suspect or suspects reportedly booby-trapped the door of the monthly magazine's offices in Istanbul's Kağıthane district with a pressure-induced bomb, and a blast ripped through the third-floor office in the six-storey building.

Ünsal Zor, 45, a columnist for the magazine was killed, while his brother and the magazine's editor-in-chief, Ali Osman Zor, and magazine staff Cüneyt Karan and Cem Türkbiner were injured in the incident that occurred around 19:30 on Wednesday evening. The powerful explosion led to the collapse of the office's walls and damaged adjacent buildings.

The magazine is known for its ties to the Great Eastern Islamic Raiders' Front or İBDA-C, a militant group that has claimed responsibility for small-scale attacks in the country in the past. The group also claimed responsibility for the 2003 Istanbul bombings that killed 57 people, although it was later discovered that al-Qaida was responsible for the attacks targeting two synagogues, a bank and the British consulate.

No one claimed responsibility for the attack, although some Turkish media outlets reported that the Revolutionary People's Liberation Party-Front (DHKP-C) claimed responsibility. There were no statements of responsibility on the websites affiliated with the terrorist organization as of press time. The İBDA-C is known for its opposition to the DHKP-C and other far-left terrorist groups, but experts point out that the militant group also suffers from infighting.

The attack comes at a time when the magazine has been linked to the Islamic State of Iraq and al-Sham (ISIS). Months before the explosion, a website known for its ties to terrorist groups opposing İBDA-C, released a report claiming Ali Osman Zor hosted a meeting in the magazine's offices with militant group's members, and that they pledged loyalty to ISIS. The same website claimed that Zor urged others to "prepare for a war."