Security forces on alert over ‘bomb-laden' vessels from Syria 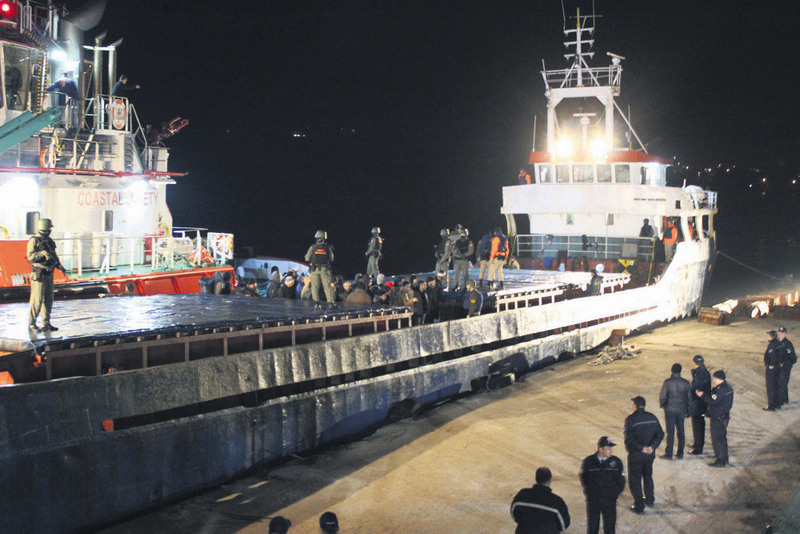 A vessel carrying over 300 illegal immigrants from Syria was stopped off the coast of u00c7anakkale on March 12. Authorities fear ships hailing from Syria may be used for sneaking weapons and terrorists posing as refugees into Turkey on the ships.
by Daily Sabah Mar 25, 2015 12:00 am

A Turkish daily has reported that vessels hailing from Syria have come under scrutiny after intelligence reports suggest that they may be carrying explosives and militants looking to infiltrate Turkey. The development adds to the woes of the Turkish authorities after a plot by Syria's Bashar Assad regime to employ former convicts to carry out attacks in the country.

An article in Vatan newspaper says the Turkish Coast Guard received intelligence on Turkey-bound vessels from Syria that warns against the possible delivery of explosives, weapons and militants. The intelligence report notes cargo vessels arriving from other littoral countries on the eastern coasts of the Mediterranean Sea also pose a risk and coastguard authorities were urged to be vigilante in the Mediterranean, Aegean and Black Sea coasts of the country.

Vatan's report says coastguard staff were warned on March 3 against non-Syrian vessels whose ports of call included Syrian cities and urged them and customs officials to exert caution for commercial ships, particular for those with Syrian crews.

Citing a report by the Customs Directorate, the newspaper said intelligence regarding the possible transfer of militants and explosives from Syria and other neighboring countries surged recently and "terrorists" from Syria also sought to cross into European countries via Turkey.

Turkey is already on alert against a plot by the Assad regime. The regime will reportedly release imprisoned criminals in exchange for their cooperation in conducting attacks in Turkey, according to an article in Sabah newspaper. Assad will reportedly free criminals who have been trained over the course of a year with the purpose of using them in the civil war and launch planned attacks in Turkey. Assad's other target appears to be Syrian rebels, which have been backed by the Turkish government since the onset of the Syrian war, and who have recently mustered further support from Western governments.

Turkey has tightened its border security with Syria at two of its border gates - Öncüpınar and Cilvegözü - on March 9 to counteract the possible infiltration. No crossing of people, goods or vehicles - except the ones with "special permission" - will be allowed until a second order is given. Furthermore, the Turkish Armed Forces (TSK) has been reportedly keeping all the entrance and exits under strict control.

The enhanced border security measures have been taken to protect against the plan to free prisoners, who are estimated to number around 1,000, and have been tasked with infiltrating Turkey, posing as needy refugees. It is feared they plan to conduct an attack similar to the two 2013 bombings in Reyhanlı, a town in the southern province of Hatay neighboring Syria, which killed 53 people.

The country is also concerned about Syrian refugees who seek shelter in European countries through Turkey. Many illegal immigrants prefer dinghies or other primitive means of maritime transport and they often end up being caught by the Turkish coastguard or dead, as boats not seaworthy usually capsize and sink due to overcrowding. However, a new trend was discovered recently when more than 300 Syrians were caught aboard a cargo ship passing through the Çanakkale Strait in northwestern Turkey earlier this month. Authorities are concerned that members of Syrian intelligence may be among refugees traveling in large vessels.
Last Update: May 11, 2015 9:06 pm
RELATED TOPICS