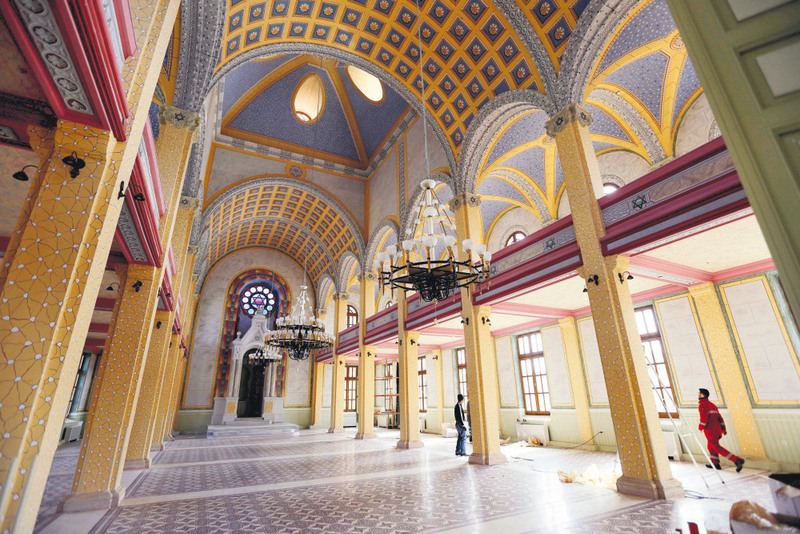 The Great Synagogue of Edirne, a historic temple in the eponymous northwestern Turkish city, will be reopened today after five years of restoration

Restored to its former glory, Europe's third largest synagogue will be opened at a ceremony that will be attended by Deputy Prime Minister Bülent Arınç, chief rabbi of Turkey's Jewish community, İsak Haleva, and a set of dignitaries. Israeli officials were also invited to the ceremony, according to Turkish media, but it is not known whether they will attend as Turkey and Israel have downgraded their relations. A religious service will be held at the synagogue for the opening ceremony. The Foreign Ministry also sent invitations to dignitaries from more than 30 countries, including the U.S.

The opening ceremony will feature the placement of a Torah, a recitation of the Ten Commandments and a concert by a Turkish Jewish school's choir.

Turkey spent over TL 4 million ($1.5 million) on the four-year restoration. Initially earmarked to serve as a museum, it was later decided to use it both as a museum and a synagogue. There is no Jewish community in Edirne, save for one family, although previously some 20,000 Jews lived there in the early 20th century. Most emigrated to Istanbul, other cities or abroad either for economic reasons or live in Israel after its creation. In 1934, a nationalist mob launched attacks on the Jewish quarters of Edirne, looting stores and beating up Jews. Similar incidents were reported in nearby towns where Jews lived, which led to a larger exodus of Jews from the northwestern Turkey.

The Great Edirne Synagogue was built in 1905 by the order of Sultan Abdülhamid II to replace 13 separate synagogues destroyed by a huge fire that devastated the city. The building was designed by French architect France Depre. The synagogue opened in 1907 and served as a house of worship until 1983 by which time the city's Jewish community had dwindled to almost nothing. The building was later transferred to Edirne's Trakya University for cultural use, but due to criticism, was handed over to the General Directorate of Foundations in 1995. The synagogue's roof collapsed two years later.

Featuring architectural characteristics of the Leopoldstadter Tempel, once the largest synagogue in Vienna, the temple which is also known as Kal Kadoş Agadol is believed to be the birthplace of maftirim, Jewish mystic music.

The restoration of the synagogue is part of the government's efforts as it seeks to restore the rights of minorities and return the properties once confiscated by the state or left in ruins.

Turkey's Jewish community is mainly concentrated in Istanbul, home to several synagogues that are in relatively good shape compared to the former state of the Edirne synagogue.
Last Update: Mar 26, 2015 10:38 am
RELATED TOPICS