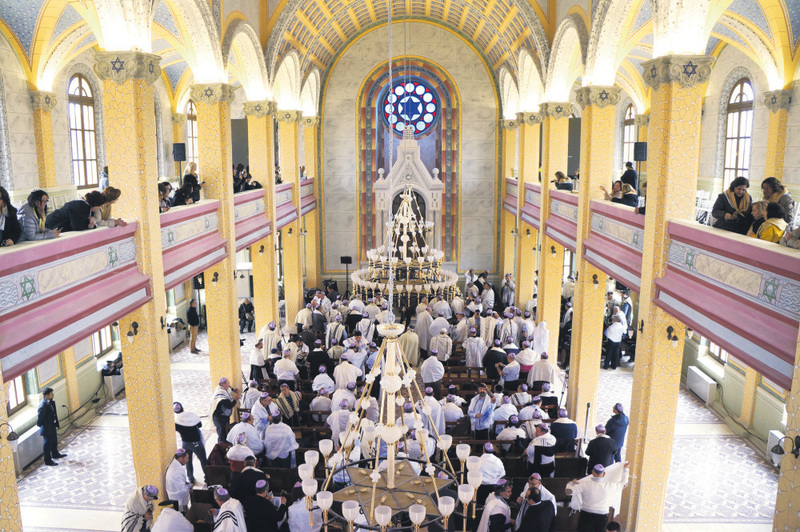 Members of the Jewish community gathered at the synagogue for a religious service prior to the official opening ceremony.
by Yusuf Ziya Durmuş Mar 27, 2015 12:00 am

The Jewish synagogue in this northwestern city underwent a four-year restoration that cost over TL 4 million ($1.5 million) covered by the government.

Twenty buses carried members of the Jewish community to Edirne on Wednesday ahead of the opening ceremony. Among them were descendants of Edirne's Jewish residents who left the city decades ago, along with the Jewish architects who took part in the restoration. The congregation held a religious service on Wednesday evening and returned yesterday for another service ahead of the opening ceremony. The crowd streamed into the temple through a road adorned with banners from the Edirne municipality that read: "Old friends, welcome back home."

Members of the Jewish community had emigrated to other cities and abroad for economic reasons, but it was the ultranationalist riots that triggered a larger wave of emigration. In 1934, mobs took to the streets in Edirne and nearby cities, with Jewish communities in what is now called the Thrace Riots, looting Jewish businesses and attacking Jews.

Rabbi David Azuz conducted the service yesterday morning, some 46 years after he led the last one before the synagogue was closed to worship as the Jewish community in the city dwindled. Azuz thanked the government for the restoration of the synagogue and said he felt excited to return to the temple decades later.

Speaking before the opening ceremony, Deputy Prime Minister Bülent Arınç said Turkey had a better level of freedom of religion and conscience compared to European countries and the restoration of the synagogue was an indication of this. "There is no anti-Semitism in Turkey nor racism. They won't find support from the public. We are truly sorry about how European and other countries lag behind Turkey in that sense," he said.

Arınç said he attended the ceremony to show that people of different faiths, cultures can co-exist in peace and security.

The Great Edirne Synagogue was built in 1905 upon an order by Sultan Abdülhamid II to replace 13 separate synagogues destroyed by a huge fire that devastated the city. The building was designed by French architect France Depre, and opened in 1907 to serve as a house of worship until 1983, by which time the city's Jewish community had dwindled to almost zero. The building was later transferred to Edirne's Trakya University for cultural use, but due to criticism, it was handed over to the General Directorate of Foundations in 1995. The synagogue's roof collapsed two years later.

Through restoration, the synagogue's lead domes and splendid interior and Torah scrolls were restored to their former glory.

The synagogue, also known as Kal Kadoş Agadol, features architectural characteristics of the Leopoldstadter Tempel, once the largest synagogue in Vienna. Edirne is believed to be the birthplace of the Maftirim repertoire, mystic Sephardic Jewish music.

Restoration of the synagogue was one of the ambitious projects undertaken by the government, which seeks to restore the rights of the often neglected minorities of the country, to promote coexistence after decades of policies supressing minorities' rights. Turkey's Jewish population stands at 20,000, according to unconfirmed figures, and while the country pursues a strong anti-Israel policy in response to the Israeli government's oppression of Palestinians in Gaza, the government assuages concerns over anti-Semitism. The Jewish community found a haven of tolerance in the Ottoman Empire for centuries after the conquest of Byzantine cities by the Ottomans. The community particularly flourished after Sephardic Jews expelled from Spain during the Spanish Inquisition settled in Ottoman lands in the 15th century, and many members of the present-day community trace their ancestry to those who arrived from Spain.
Last Update: Mar 27, 2015 10:22 am
RELATED TOPICS