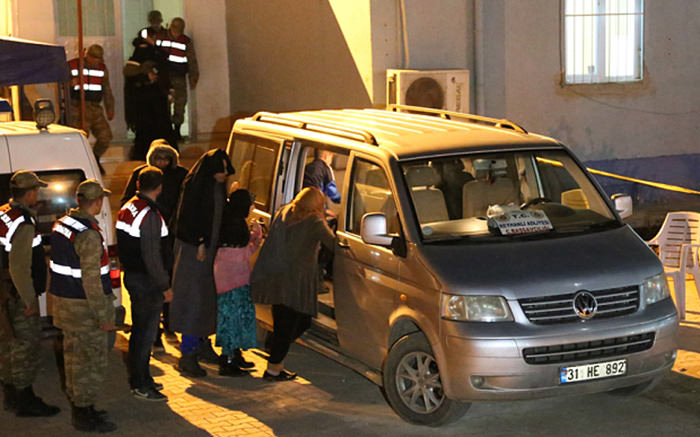 Military patrols on the border with Syria detained another nine British nationals trying to join ISIS, a further example of the inadequacy of the U.K. government’s efforts to clamp down on the terrorist group’s British supporters

Nine British and one French citizen were caught while attempting to cross the Turkish border to Syria to join the Islamic State of Iraq and al-Sham (ISIS) in the southern province of Hatay, according to a statement released on Wednesday by the Turkish Armed Forces. The suspects were taken into custody and have been sent to the Foreigners' Office for deportation. The foreigners that attempt to join ISIS by traveling through Turkey – predominantly British citizens – have raised questions over the capability of U.K officials to spot and prevent potential fighters that are looking to join ISIS. While Turkish officials complain about inadequate intelligence sharing from the West, and the U.K. in particular, the incessant flow of British citizens has raised some eyebrows as to whether Britain is taking up the issue as efficiently as it should. In the latest incident, nine British suspects were detained at the Hatay Oğulpınar Patrol border post, the Turkish Armed Forces said.

"Turkey has foiled an attempt of nine British citizens to enter Syria and detained them," the statement read. The British citizens had a health check and underwent fingerprinting before they were sent to the foreigners' unit, the officials said.

In a separate case, an Algerian-born French citizen was detained in southeastern Turkey's Gaziantep province, according to a statement by the provincial governor's office. The office identified the French citizen as S.B., who was also arrested for allegedly trying to cross the border into Syria.

Turkey has been doing its part to identify and deliver potential foreign fighters who are seeking to cross the border to Syria to join ISIS, despite little cooperation in intelligence sharing from Western countries. The latest in a series of these efforts has been the detention of 10 foreigners at its borders, adding to the list of 1,186 people who have been deported thus far. Turkey has also issued exclusion bans on 12,519 suspected individuals up until now, demonstrating its success in blocking the passage of potential fighters heading to join ISIS through Turkey.

Britain had already become the target of accusations following its failure to spot three British girls who left their homes to join ISIS through Turkey. The British, who initially dodged responsibility and placed the blame on Turkey, were forced to accept their failure in spotting the teens in time. They later apologized to the families of the teens for the mistake. However, seemingly unable to learn its lesson, Britain continues to be incapable of preventing its citizens from joining ISIS and causes Turkey difficulties, as it purportedly fights alone against the problem.

Following the news of the incident, the U.K. Foreign Office said they were in contact with Turkish authorities and were ready to provide consular aid as required. However, Turkish officials, who have requested more support from the West at every opportunity, are counting on more solid steps to stem the flow of foreign fighters. Foreign Minister Mevlüt Çavuşoğlu had previously said that one of the main problems is that individuals who are deported from Turkey keep returning, and highlighted the refusal of some countries to take the issue seriously.

As part of Turkey's efforts, the police force has tightened security at transfer points such as airports, terminals, bus stations and rental car companies via a special risk analysis system, and a team tasked with tracking suspicious foreigners who travel to Turkey for the first time and those who are minors who do not have a hotel reservation.

The police department's counter-terrorism unit, intelligence unit and airport security teams have cooperated in sending back hundreds of foreigners who they consider to be a security risk. Sources say that attempts to join ISIS continue to rise into March. A total of 34 foreigners who arrived in Turkey last month were questioned by profiling experts after their arrival.

Those deported were of different origins with an age varying from 15 to 35. The suspected foreigners claimed that their purpose of visit was work-based, tourism or visiting friends or relatives, but security forces who had suspicions about the possibility of them joining ISIS sent them back to the countries where they had traveled from.