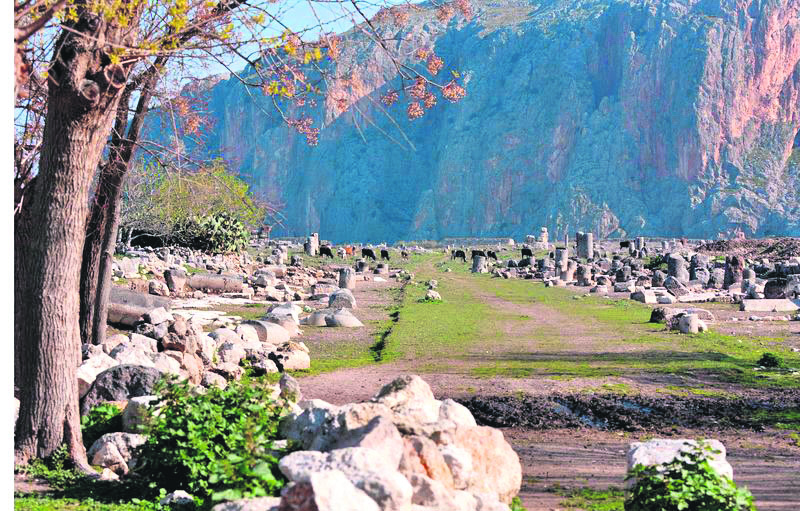 by daily sabah Apr 01, 2015 12:00 am
Considered as the first double - way road of ancient times, the road lined with columns in the ancient Cilician city of Anazarbus - located near Dilekkaya village in Adana's Kozan district - continues to be brought to light through archaeological excavations. Assistant Professor Fatih Gülşen of Çukurova University's Department of Archaeology, the excavations' chief scientist and consultant, offered insights to an Anadolu Agency correspondent about the city. Anazarbus was one of the most important centers of the Cilicia plain, and its heyday was between the third and fifth centuries. Stressing that the ancient city was among the most important military bases of the Roman Empire in the Eastern Mediterranean, Gülşen said that Anazarbus contains traces of Hellenic and Roman civilizations as well as Byzantine, Sassanian, Armenian and Ottoman civilizations. "There is a 2,700 meter-long double-way road lined by 34 meter-wide columns starting from the monumental doors that open the road. The road was the first and biggest main road of the ancient world that has been excavated so far," he explained. Gülşen, who noted that 1,360 columns have been discovered through surface excavations, said, "Once the columns are raised, Anazarbus - one of the most glorious ancient world cities - will come into view again. There are two other avenues intersecting the main road, and archaeologists are currently conducting research on the shops near the road and the sewage system. Gülşen said that Anazarbus, which spreads over a 4,000 hectare area, has a larger site than Ephesus, the biggest ancient city known in Anatolia.
Last Update: Apr 01, 2015 3:07 am
RELATED TOPICS