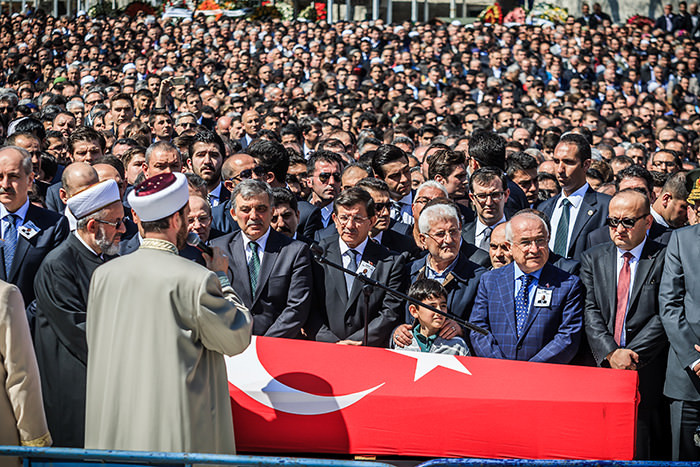 by Yusuf Ziya Durmuş Apr 02, 2015 12:00 am
Speaking about the killing of a prosecutor at the Istanbul Çağlayan Courthouse by terrorists from the DHKP-C, President Erdoğan and Prime Minister Davutoğlu warned of a plot against Turkey and underlined they would counter efforts against democracy.


Turkish leaders yesterday said the killing of Prosecutor Mehmet Selim Kiraz at an the Istanbul Çağlayan Courthouse on Tuesday by two militants from the Revolutionary People's Liberation Party-Front (DHKP-C) were part of a plot to incite chaos in Turkey. President Recep Tayyip Erdoğan and Prime Minister Ahmet Davutoğlu vowed to continue fighting terrorism while Erdoğan reassured that "democracy would not succumb to such attacks."

Speaking yesterday after a funeral for Kiraz, Prime Minister Ahmet Davutoğlu said terrorists had made 'International phone calls' and warned that Turkey faced 'an alliance of evil."

Prime Minister Davutoğlu said the attack was not the first time that the government faced a plot to sow chaos in the country. "They are doing the same thing they did in 2013, in Reyhanlı, at Gezi," he said, referring to mass riots under the pretext of protests over redevelopment of an Istanbul park and twin bombings in the southern Turkish town of Reyhanlı that killed 53 people.

He stated that "terrorists made international calls" while they were holding the prosecutor hostage on Tuesday evening. "The investigation deepens and we will share the findings with the public. There were phone calls made (during the six-hour hostage crisis) and we will detect the network (of terrorists) and from where they received instructions," he said.

Mehmet Selim Kiraz was in his sixth-floor office at the Çağlayan Courthouse complex on Istanbul's European side when two gunmen entered on Tuesday morning. Soon, assailants released photos on social media showing one of them pointing a gun to Kiraz's head and listing a series of demands. Their motivation was apparently Kiraz's role as the prosecutor investigating the death of Berkin Elvan, a rioter who took part in the 2013 Gezi Park protests. Elvan died last year after 269 days in a coma induced by injuries he suffered when a tear gas canister fired by police hit him. The DHKP-C had adopted him as a symbol of its efforts to draw support for a violent campaign against the Turkish security forces. After hours of negotiations, the police's special forces unit stormed the room when gunshots were heard from inside. Two terrorists were killed, and Kiraz, already heavily injured when gunmen shot him multiple times before the raid, succumbed to his wounds in hospital.

The prime minister also expressed anger at opposition leaders who did not show up at the funeral. "Those who cannot share the pain of the nation, cannot have a say in the nation's future," he said.

Davutoğlu vowed that they would pursue "whoever was behind this attack" and noted that Turkey was facing "an alliance of evil."
"We will not fall into their trap," he said. Davutoğlu also warned against riots in the wake of the attack as was the case in Istanbul on Tuesday night. "I ordered all measures to be taken on the streets," he noted.

Early yesterday, police in the western cities of İzmir and Eskişehir and in the southern city of Antalya, rounded up supporters of the terrorist group. Anadolu Agency reported that 29 people were detained in the three cities.

On Tuesday night, supporters of the terrorist organization took to the streets in Okmeydanı, where the courthouse and Berkin Elvan's neighborhood are located and in the Gazi neighborhood. Rioters clashed with police before they were dispersed by tear gas and water cannons.

Erdoğan cut short his Romania visit to travel home yesterday evening and said at a press conference that he would visit the grieving family of the late prosecutor.

Speaking in Romania, Erdoğan said Turkey was determined to pursue its fight against terrorism, adding that "democracy is not an ordinary system that would succumb to attacks like this," adding: "Those believing in democracy should stand together against these terrorists."

Erdoğan said he and other top officials would hold a security summit once he returned to Turkey. "As administrators, we need to stay alert on these matters," he said. He said terrorism was not a new threat for Turkey. "But what stands out now is those who attempt to politicize this attack," he said. Erdoğan urged the opposition parties to adopt a national stance after the attack. He was referring to the opposition parties that remained silent over the attack and turned to blame the government. Erdoğan also criticized media outlets that published photographs released by the terrorists.

Kiraz's tearful colleagues also held a farewell ceremony at the courthouse where he was killed. Every floor of the enormous building overlooking a large interior space was filled with lawyers, prosecutors, judges and courthouse staff paying respects to Kiraz. They unfurled a large Turkish flag and a banner reading "we will not forget you, our martyr."

The incident was the latest episode in the terrorist organization's attacks, ranging from a suicide bombing at the U.S. embassy in 2013 and a string of assaults on security forces.

It kept a relatively low profile for many years. Additionally, its attacks were relatively minor compared to the PKK, another terrorist organization active in Turkey; however, the DHKP-C have stepped up its attacks over the past two years. In 2013, a DHKP-C militant carried out a suicide bombing at the U.S. Embassy compound in the capital, killing a Turkish security guard.

The DHKP-C also claimed responsibility for non-lethal rocket attacks targeting the Justice and Development Party (AK Party) headquarters, the Turkish National Police headquarters and a Justice Ministry building in Ankara in 2013. The group, designated as a terrorist organization by Turkey, the U.S. and the EU, advocates a far-left ideology. Moreover, its members do not have a homogenous ethnic background like the PKK, which mainly draws support from Kurds. The DHKP-C's power has significantly declined since the death of Dursun Karataş, one of its founding leaders, in 2008.

The terrorist organization is particularly active in Istanbul's working-class neighborhoods and at universities across the country where it recruits members among impressionable youth persuaded with a promise of a Marxist-Leninist revolution. The background of Şafak Yayla and Bahtiyar Doğruyol, the two men who took the prosecutor hostage, is similar to those involved in the attacks in the past but Şafak Yayla's family ties are exceptional.

Şafak Yayla is the brother of Bulut Yayla, another DHKP-C member who was specifically designated as a terrorist by the U.S. State Department in 2013, after the bombing of the U.S. embassy in Ankara. He was detained in 2013 as he entered Turkey from Greece. He was planning to stage attacks against foreign missions when he was captured, according to officials. He was also reportedly one of the names masterminding the attack on the U.S. embassy. The older Yayla allegedly served as the head of the "youth branch" of the DHKP-C in Okmeydanı, where his brother carried out the attack on the prosecutor. Both were attending university when they joined the DHKP-C, and Şafak Yayla studied law. Mehmet Yayla, another brother, was captured by Greek security forces as he was heading to Turkey from a Greek island aboard a rubber boat loaded with munitions in 2013. He is currently in prison in Greece.

Yayla, like the other assailant Bahtiyar Doğruyol, was detained in an operation against the DHKP-C. Both men stayed in the same prison and reportedly became close while serving their brief sentences. Yayla was released in December 2014, while Doğruyol was released one year earlier. Şafak Yayla was reportedly planning to carry out a suicide bombing when he was captured, according to Turkish media. Doğruyol was apprehended while traveling to Greece via Edirne in northwestern Turkey.

As with every terrorist organization, conspiracy theories abound concerning the DHKP-C, with allegations that the group was used as a "tool" by intelligence services, both local and foreign, in the past, to conduct attacks to serve their interests.

The organization claimed responsibility for two attacks this year. A foiled attempt to attack security guards outside Dolmabahçe Palace in Istanbul was followed by a militant shooting at police officers in Istanbul's Taksim Square in January. No one was injured in the attacks. Last week's attack on the offices of a magazine, which killed one writer and wounded three others, was also blamed on an affiliate of the organization – though it did not claim responsibility through Halkın Sesi (The Voice of the People), a Twitter account where the group's members generally announce their attacks.

Apart from outright terror attacks, the organization also looks to make a name for itself by exploiting protests such as the Gezi Park incidents of 2013. It was common to see shotgun and pistol-wielding members of the DHKP-C roaming the streets, especially in working-class neighborhoods where it recruits supporters, during the protests and subsequent rallies last year under the pretext of commemorating rioters who died during protests.
Last Update: Apr 02, 2015 11:58 am
RELATED TOPICS