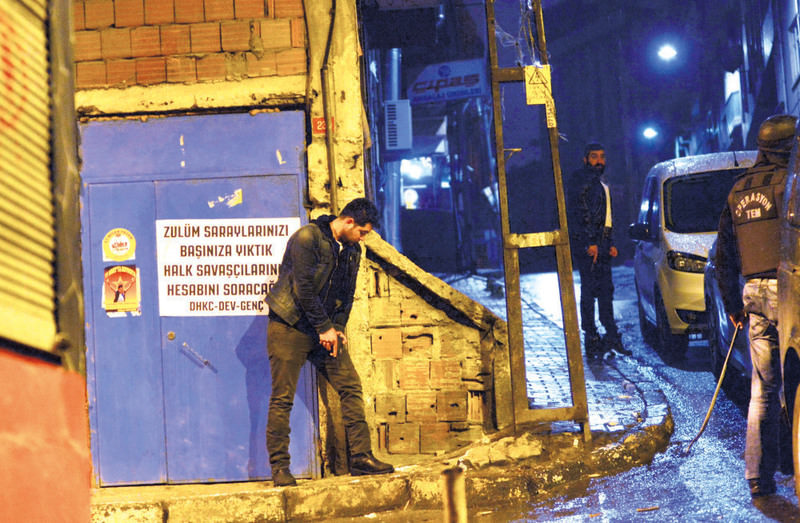 Plainclothes police officers stand outside a building in Okmeydanu0131 during an operation against the DHKP-C in the early hours of Thursday.
by Yüksel Temel Apr 03, 2015 12:00 am

Intelligence reports on two terrorists who were killed in a raid at Istanbul's Çağlayan courthouse on Tuesday, after they gunned down the prosecutor Mehmet Selim Kiraz, revealed they made a call to senior officials of the Revolutionary People's Liberation Party-Front (DHKP-C) residing in Greece. Senior militants ordered Bahtiyar Doğruyol, one of the terrorists, to kill Kiraz on the phone. Phone calls were made to Agonas, a Greece-based daily published by the terrorist organization's members, for a lengthy period during the hours of hostage crisis in the courthouse. Upon instruction from DHKP-C leaders in Greece, he shot the prosecutor dead. Intelligence sources said his superiors were working at the magazine and a television station affiliated with the terrorist organization.

Greece, along with Syria, which is regarded as the birthplace of the group, are among countries where the members of the terrorist organization took shelter after a string of crackdowns by Turkish security forces in the past. Lavrion, located on Greece's Aegean coast, houses a refugee camp which is largely occupied by terrorists who use it as a training camp for their activities.

The terrorist organization was planning to relocate the camp to Georgia before the Greek elections after the previous Greek government pledged to shut down the camp but decided to keep it after Alexis Tsipras's radical leftist government came to power.

The Lavrion camp has housed several DHKP-C militants since the 1970s, long before far-left militants founded the present-day organization after splintering from a larger body of radical factions.

Bahtiyar Doğruyol was captured in 2012 in the northwestern Turkey while he was trying to sneak into Greece to travel to Lavrion. He was released last year.

Among the former residents of the camp was Ecevit Şanlı who entered Turkey with a forged passport and blew himself up in front of the U.S. embassy in Ankara two years ago, killing a Turkish security guard.

Greece has long been a favorite hideaway for militants from the DHKP-C, as well as the PKK, another terrorist organization. Under the guise of asylum seekers "fleeing persecution" at home, terrorists are often accepted into the country.

The country, that had strained ties with neighboring Turkey, changed its much-criticized policy of tolerance for supporters of the terrorist organization and a number of militants were arrested last year in several operations, including high-ranking members of the group. The move was seen as improving counter-terrorism cooperation between Turkey and Greece although the refusal of Greek courts to extradite several suspects overshadowed the efforts.

Meanwhile, Turkish security forces have continued their clampdown on supporters of the terrorist organization. The latest crackdown was in Istanbul's Okmeydanı, a neighborhood on the city's European side where the DHKP-C draws support. It came hours after Elif Sultan Kalsen, a DHKP-C member accused of carrying out an attack against police at Taksim Square in January, was shot dead when she opened fire and attempted to hurl bombs at police officers in front of Istanbul headquarters of Turkish police.

In the Okmeydanı operations, where offices of several associations linked to the terrorist organization were raided, police found a cache of weapons and a jammer device. Turkish media reported that the raided places had tight security and police had to remove a set of 11 steel doors in one location to enter inside before the suspected militants burned or destroyed evidence that might link them to the organization.
Last Update: Apr 03, 2015 2:17 am
RELATED TOPICS