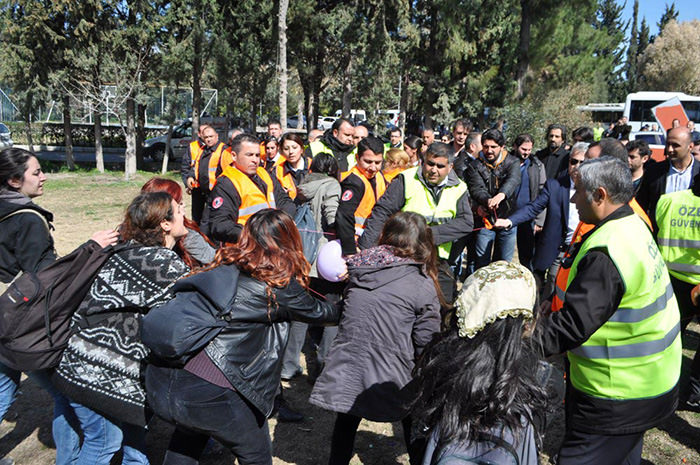 |DHA Photo
by Yüksel Temel Apr 03, 2015 12:00 am
Private security guards in public buildings may be replaced with police after the killing of a prosecutor at Istanbul's Çağlayan courthouse earlier this week by two terrorists.

Terrorists entered the courthouse complex on Tuesday under the guise of lawyers who, along with judges and prosecutors, are not subject to search at security checkpoints. The two terrorists then took prosecutor Mehmet Selim Kiraz hostage. After hours of negotiations, police raided Kiraz's office after the gunmen shot him multiple times, and killed them.

As security camera footage shows, both men wore suits and flashed forged lawyer IDs; thus, they had no trouble entering the sprawling complex of courthouses. Moreover, they walked into the room of the prosecutor without drawing a single suspicion.

The incident sparked outrage over security, or the lack thereof, at courthouses and other public buildings. After the attack, President Recep Tayyip Erdoğan said that he would propose the abolition of private security firms. He also added that dismissed security guards could find employment in law enforcement.

Private security is a flourishing sector in Turkey that has seen a boom in employment in the past decade, in parallel with a growing economy and after a 2004 law which facilitated the establishment of private security companies. Official figures show 600,000 people work as security guards.

The government is expected to remove security guards from public institutions first, such as courthouses, hospitals, universities, stadiums and airports. The plans also stipulate the employment of security guards by law enforcement agencies if they succeed in passing physical ability tests. Some 10,000 guards will initially be hired by the Turkish National Police and will have the same rights and authority as police officers.

Figures show 1.5 million people are registered as security guards although more than half are not actively working in the sector. Guards are subject to a set of exams before being issued security guard permits. The majority of them are either those without previous experience and high school graduates or retired policemen. Experts say many security guards see it as a temporary job and quit when they find a better-paying job.

Private guards are not as skilled as police or soldiers due to limited training, raising concerns about their ability to respond to acts of violence in their area of responsibility. Guards have come under fire for past incidents, especially regarding their efforts to tackle violence, including armed brawls at the Çağlayan courthouse, violence targeting doctors at hospitals, violence between fans in stadiums and clashes between students at universities. Along with their failure to tackle such incidents properly, they are criticized for using disproportionate amounts of force in other cases, which has led them to gain notoriety in the media with the often-used headline "security guard terrorism."
Last Update: Apr 03, 2015 7:08 pm
RELATED TOPICS