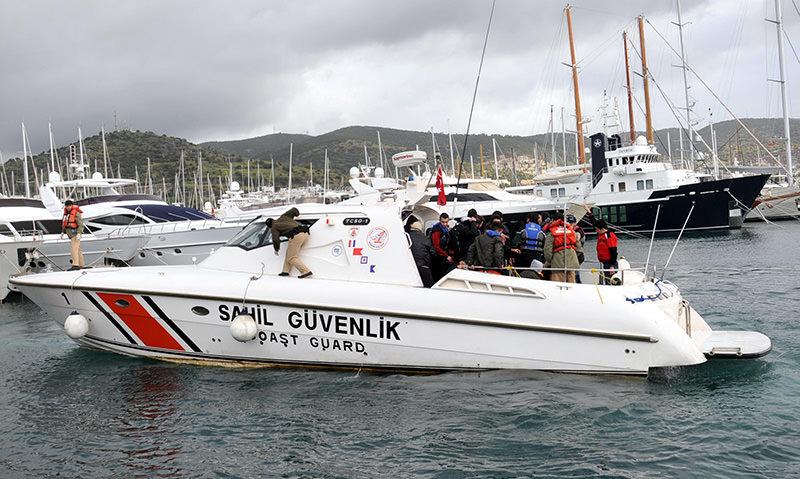 | DHA Photo
by Daily Sabah with AA Apr 03, 2015 12:00 am
Turkish Coast Guard crews have rescued 376 illegal migrants in operations carried out in the Aegean Sea between March 30 and April 3, Turkish provincial office said in a statement Friday.

Most of the migrants came from Syria.

According to the İzmir Governor's Office, 252 of the illegal immigrants were from Syria, another 42 were from Afghanistan and the rest of them from Africa.

The African and Afghan immigrants were sent to the foreigners' office, a branch of the Turkish police, for deportation. However, the illegal Syrian migrants were not deported because of the ongoing civil war in Syria.

Most illegal migrants dream of reaching developed European countries through illegal sea routes to escape conflict zones where they reside.
Nearly 1,900 people lost their lives in the Mediterranean Sea in 2014 in their attempts to cross into Europe, according to the U.N. Refugee agency and the International Organization for Migration.

The Aegean Sea is a hotbed for illegal immigration, according to figures indicating more than 12,000 immigrants were caught by the Coast Guard last year. Undocumented immigrants from Middle Eastern and Asian countries increasingly head to Europe from Turkey via the Aegean Sea despite the ever-present risk of death in overcrowded dinghies.

The Coast Guard captured 12,872 illegal immigrants in 2014 in 524 cases as they were trying to cross into Greece via the country's islands located near Turkish territories by boarding small boats. An average number of 35 people were captured daily while the Coast Guard managed to apprehend only 74 smugglers. Immigrants pay large sums to smugglers who often abandon them halfway through the trip to escape capture. The number of illegal immigrants captured in 2013 by the Coast Guard was 8,047, with 6,937 of them captured in the Aegean Sea. Figures rose considerably in three years, from 2,531 in 2012.

Syrians who were displaced by four years of civil war in their country make up the majority of captured migrants. Although Turkey offers a safe haven for hundreds of thousands of Syrian nationals, many look to travel to Europe in pursuit of better employment. Immigrants from Myanmar and Afghanistan are also among the immigrants captured most often in the Aegean Sea during their journey of hope.

Almost all trips end up with the sinking of the boats carrying immigrants, as most travel in small rubber boats that are not built for long-distance travel. The boats are generally boarded by about two dozen people despite their capacity being far below that. According to 2014 figures by the Coast Guard, the bodies of 154 people were found in 842 operations against illegal immigrants throughout 2014, but this figure might be higher since most migrants enter Turkey illegally from the country's southern and eastern borders before reaching its western shores.