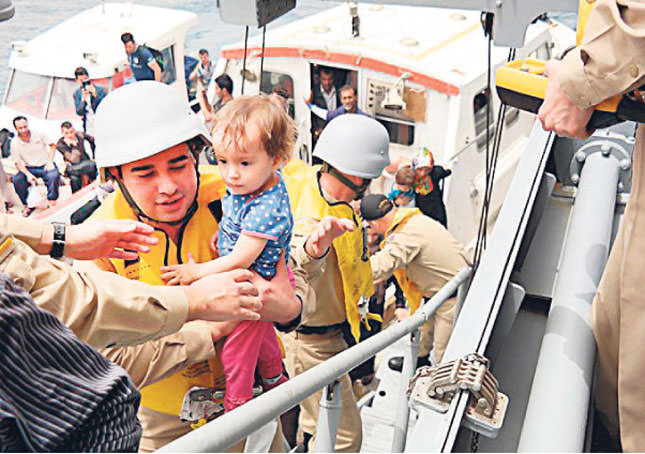 by Daily Sabah with AA Apr 05, 2015 12:00 am
185 Turkish citizens including 45 from different nationalities residing in the capital of Yemen, which is currently in turmoil due to the Saudi-led coalition's military operation, have been brought to Turkey, as part of Ankara's efforts to avoid any possible harm against its citizens who live abroad. Fifty-five others had already been evacuated from Aden and brought to Turkey on Friday. Ankara has evacuated 185 of its citizens from Sana, the capital of Yemen, to be brought to Turkey. A total of 230 people including those from other nationalities left Sana and took the Turkish Airlines (THY) flight to Istanbul after passport procedures were completed through the efforts of Turkish Ambassador to Sana Fazlı Çorman. The plane carrying the group took off around 12:45 p.m. and landed around 6:00 p.m. at Atatürk Airport in Istanbul.

Turkey's navy evacuated 55 Turkish citizens from Yemen's port city of Aden, the Turkish Foreign Ministry announced in a statement on Friday.
According to the statement, "The Turkish navy vessel, TCG Büyükada Frigate, has completed the evacuation of 55 citizens from Yemen's Aden city. Our citizens will first land in Djibouti, from where they will be transported to Turkey via Turkish Airlines." The Saudi Arabia-led military operation, dubbed "Operation Decisive Storm," has launched numerous airstrikes in Yemen since late Wednesday, which has made the situation for Turkish residents in the volatile country increasingly dangerous. "After the launch of the Saudi-led coalition's military operation in Yemen, we have been conducting a rigorous operation to evacuate our citizens in the country," the ministry added. Riyadh said that the strikes were in response to calls by Yemeni President Abd Rabbuh Mansour Hadi for military intervention to "save the people from Houthi militias." Turkey had previously evacuated its citizens from Libya in 2011 upon the order of then foreign minister, Prime Minister Ahmet Davutoğlu due to intense clashes and rise of insurgency during the Libyan civil war.